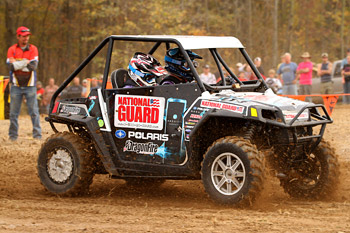 “We would like to congratulate William and his team on an awesome side-by-side racing season,” said Donna Beadle, race team manager for Polaris Racing. “It was a well-deserved championship win for one of the most dedicated racers in the industry. We are thrilled.”

Yokley needed a top 10 finish at Ironman in order to clinch the championship, but nothing in racing ever comes easy.

After starting strong in third place, on the third lap, the steering wheel started to loosen due to the hold down bolts backing out. It got progressively worse until the wheel almost came off.

The team stopped at their pit area, and got a ratchet and socket to tighten it down. The bolts had worn the loose steering wheel to the point that they would not stay tight. As the team raced through the corn fields, co-pilot, Kevin McNutt would hand Yokley the ratchet to retighten the bolts.

With the time lost in the pits and slowing of the pace, the team finished in Ninth place and sealed the championship.

“It was a hard fought battle all year long as the competition in the GNCC keeps getting stiffer, but my RANGER RZR S 800 provided me the performance and reliability to go out and bring home the championship,” said William Yokley. “A special thanks goes out to Polaris Industries and the rest of the National Guard Team sponsors!”