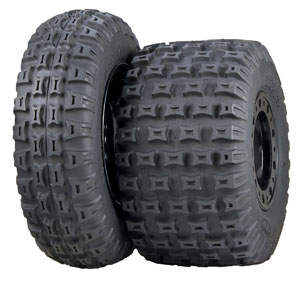 If you are serious about your performance on a motocross track, then you need to take a serious look at ITP’s new QuadCross MX PRO Lite front and rear tires.

The QuadCross MX PRO Lite represents the next big step in race tire technology, by way of significant updates to an already proven product.

Compared to the QuadCross MX PRO, this new tire is a pound lighter in front and two pounds lighter in back — a monumental difference considering the standard tire was already one of the lightest on the market.

Acceleration, braking, cornering and overall balance and feel have all benefited from this new carcass as well as a tried-and-true tread pattern, especially on hard-packed track surfaces.

This is not just a softer tire that hooks up well for three laps and is then ready for the dumpster! This is a pro-level tire now being made accessible to all racers.

The new QuadCross MX PRO Lite was made possible through the tireless efforts and invaluable input of numerous factory riders and technicians during the 2008 racing season, specifically from Team Monster Energy Kawasaki and Team Yamaha’s Dustin Nelson.

These teams are running the QuadCross MX PRO Lite in 2009 as well, and in fact Kawasaki’s Josh Creamer gave the new production model a winning debut in the AMA ATV Pro National season-opening moto at Glen Helen Raceway in March (grabbing a decisive holeshot and leading from wire to wire).

According to team manager Jimmy White, “During pre-season testing we were looking for every advantage we could find, and this new QuadCross MX PRO Lite dropped our lap times by two seconds compared to any other tire we tried — that’s a lot for any single component change, so the choice was obvious.”

Defending ITP/Yamaha QuadCross Series Champion Dustin Nelson used the production tires for the first time at the second round of the 2009 season and took holeshots in both his heat and the main event, and ended up winning for the first time this year. “I definitely noticed a huge improvement for the start and acceleration,” he reported. “The new tires make the bike feel like it has an extra pony or two.”

The new QuadCross MX PRO Lite is now available in 20×6-10 front (P/N 560554) and 18×10-8 rear (P/N 560533) sizes. You can find them at ITP’s trackside support area at all the events on the AMA ATV Motocross Championship Series, ITP/Yamaha QuadCross Series and World Off-Road Championship Series schedules. Of course you’ll find them at your favorite ATV parts source as well — we sell what we race!

Dirt Trax Onlinehttps://www.atvmag.com
Check back frequently for new content and follow us on social media!
Previous articleKingQuad Aftermarket Parts
Next articleWimmer On Top at Birch Creek