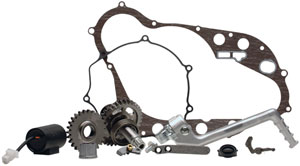 Yoshimura has a solution for serious QuadRacer R450 racers who demand performance and weight savings.

Reducing weight is usually a trade-off when it comes to race machines, but not so with Yoshimura’s Kick Start Kit.

This Kick Start Kit not only pulls almost eight pounds from your LTR but also gets rid of a lot of weight up high, by doing so this lowers the center of gravity, which improves the handling characteristics.

The kit also reduces the mass on the crankshaft thus making for a little more bark and “snappier” overall performance.

The Kick Start Kit includes a capacitor making everything nice and “sparky” as well as a Yoshimura Shift Pin Kit to strengthen the engine cases.

Dirt Trax Onlinehttps://atvmag.com
Check back frequently for new content and follow us on social media!
Previous articleKingQuad Aftermarket Parts
Next articleWimmer On Top at Birch Creek