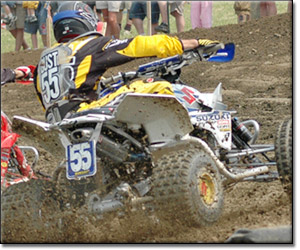 Steel City Raceway was a new venue for the 9th round of the ATVA Motocross Nationals. But it was deja-vu for Team Yoshimura Suzuki with Gust and Jones splitting the wins for the second event in a row.

Gust got the holeshot in moto one with Jones not far behind. Jeremiah got cut off at the first off camber turn, and Doug was passed mid-way through the first lap by a hard charging Keith Little.

Doug passed and pulled ahead at the half-way mark and drove it home. Jeremiah just didn’t seem to be able to get the after burners engaged on this moto, but was able to salvage the race in 5th.

Once I got my act together, Gust reflected after the race, I was able to pass Little and go for the win. It was an easy, comfortable ride. I wasn’t even pushing that hard. The Fox shocks were working great and the Suzuki LT-R450 just pulled me to the finish.

The second moto was a whole different race. Coming out of the second turn it was a full out melee with Jones just scraping his way out early. It was a mess. I had someone hung on my rear tire and I was just dragging him through there. I was lucky to get out, Jones said.

Gust was not so lucky. Jeremy Lawson was in front of me, Gust explained. I got tapped and pushed into him and someone else. We were really stuck bad. Once free, it took Doug three laps to catch up with the last place rider. But then the march began.

Gust was on on a mission  one by one they fell as he tore past riders methodically attacking the technical course. The crowd cheered him on as they watched one angry and driven man go from last place to 5th in less than 30 minutes.

Overall, Gust tied Dustin Wimmer for third but received the 4th position due to the tiebreaker – placement in the second moto.

Jones went home with 2nd overall behind a very happy Keith Little who won the overall with a 2/1 moto score.