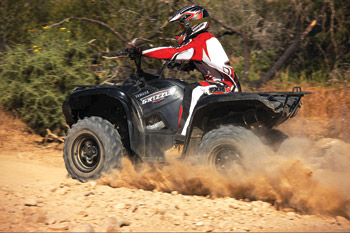 Prime Rib in the Meat of the Market

The introduction of Yamaha’s new Grizzly 550 FI EPS fills a gap Yamaha hasn’t been filling in this segment with the Kodiak 450.

When you get your first glance at the Grizzly 550 FI EPS you’d swear you were looking at a full-sized Grizzly 700. Actually the new 550 is a spitting image of its bigger brother with the same frame, wheels, handlebars and lights. Get this: all 700 Grizzly accessories will fit the new 550 as well. Sweet.

Although it weighs roughly the same as a Grizzly 700, the 550 feels surprisingly light and nimble. Yamaha has also equipped the 550 with a super soft seat filled with high grade foam that won’t lose its density over time. Once your cheeks get cquainted with the new seat they’ll have a hard time parking anywhere else.

Five-way pre-load adjustable shocks now mounted to the lower A-arms and an under-seat fuel tank further add to the riding experience and with these additions, the lower center of gravity inspires riding confidence.

Both the 550 and the 700 feature new guards this year that completely cover the A-arms providing improved protection from rocks and stumps. Although the shock mounts have been moved to the lower A-arms, Yamaha claims five inches more useable ground clearance up front.

The ease of operation is so noticeably different with electronic power steering you really have to experience it to believe it. We’ll go out on a limb here and say Yamaha has nailed the power steering thing perfectly. It kicks in when you need it most, particularly at slower speeds and in tight turns.

If power steering doesn’t do it for you, you can opt for the more budget-conscious version of the 550 FI Grizzly without power steering for about $700 US less.

Fuel injection makes a noticeable difference in throttle response delivering consistent power at higher elevations. The fuel injection system on the Grizz can detect changes in altitude and temperature and compensate by delivering accurately metered burst of fuel during every stroke.

Yamaha’s Ultramatic transmission is one of the best in the biz and its constant belt tension translates to less heat, which ultimately means a reduced chance of breakage or wear from slippage.

Yamaha has delivered one of the best-equipped machines in the most important segment of the industry. No doubt the competition will be paying very close attention.