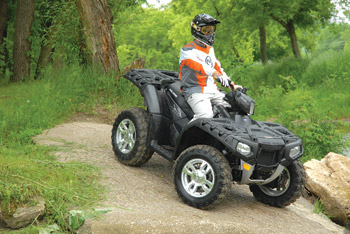 While it’s no surprise the extremely popular Sportsman was due for an overhaul, there was a lot of speculation about when it would happen and if it was possible for the engineers at Polaris to make a Sportsman ride any better than it already does.

Polaris fans have been waiting with drooling enthusiasm for a new Sportsman, hoping for a hearty new American made powerplant able to give the Outlander 800 and T-Cat a run for the money. As soon as the sheets were pulled off the entirely new 850 and 550 EFI Sportsman models we knew the game had changed.

Refusing to pull any punches, the Polaris alumni told us this was a new rig from the dirt up. The only part making the transition was the good old black plastic shift knob.

The new 850 and 550 mills are not overbored versions of the old OHC single and OHV twin but entirely new overhead cam engines. The 550 is a single cylinder EFI unit cranking out 40hp while the 850 parallel twin thumps a whopping 70 hp, bringing it in line with the competition.

Similar to Honda, the new Sportsman turns the mill sideways but the CVT now rotates vertically. This new design puts your butt on top of the secondary clutch with the primary below that.

Although the CVT may be harder to access for a belt change, the drain plug is still simple to find in case you get wet. Reasoning for the radical repositioning of the mill is to narrow the Sportsman’s decade old wide foot stance on the running boards. The old Sportsman was wide in the center and difficult for smaller riders to straddle.

In 2009 models, the seat is five inches narrower. The same amount is added to the running boards making big, wide floorboards easy to get onto and a seat that’s svelte to straddle. Up front the radiator positioning gets a total overhaul, moved up higher to a less restricted area and easier to keep clean and gain access to.

As if that wasn’t enough, Polaris went for the competition’s throat offering available power steering, using a brushless, progressive motor. After testing it, we feel it works better than current offerings and Polaris claims the system will run longer than the competition’s.

On top of all this you now get 14-inch aluminum rims from the factory making room for four hydraulic disc brakes on the 850 and three on the 550. There’s all-new digital gauges, completely redesigned bodywork and myriad other cool features.

Suffice it to say, the ’09 Sportsman is a completely clean CAD screen.