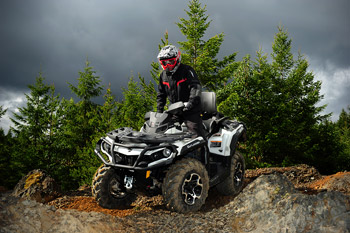 A great deal of anticipation surrounded the introduction of Can-Am’s 2013 lineup – particularly in the area of its Commander side-x-sides.

We’d be lying if we said we weren’t expecting Can-Am to bring either a 4-seater Commander or a pure sport SXS to the market to compete with the RZR XP or the new Wildcat.

For this intro however, we didn’t see either of these units come to market. However, we’ve been assured they are on their way so let’s have a look at what is new for MY13…

Can-Am’s Commander has been plagued with heavy steering so for 2013 Can-Am added a long awaited power steering option in its Limited package and in a new DPS trim level. Sure you can still get your Commander in the base trim without power steering, but we urge you to take a test ride on a PS equipped unit. You’ll gladly throw down a few extra bucks to have it.

Can-Am’s Outlander Max sees the addition of the G2 architecture introduced to last season’s Outlander line from the 500 Max up to the 1000 Rotax.

Ride is superb with every comfort consideration addressed for both the pilot and passenger and made that much better with 6-way adjustable air suspension to deliver the ultimate in comfort touring. Thumb controls allow you to adjust the suspension to whatever setting suits you and your passenger.

You can also remove the passenger seat in no time flat thanks to Can-Am’s LINQ system and you’d be easily forgiven for mistaking the Max for a 1-up Outy. The Limited also features a glistening pearl white paintjob and a Garmin GPS to make your trip that much more luxurious.

The 500 Outlander finally received the long-awaited bodywork changeup donning the G2 platform for the 2013 season and away go its MacPherson Strut front suspension replaced by dual A-arms. In fact now every Outlander features this bodywork from the 500 up.

The 500 Outlander has undergone some engine refinements as well in order to fit the current mill into the G2 chassis. Can-Am claims these modifications boost horsepower by a whopping 15 percent! We look forward to a longer evaluation to really see what this engine is capable of.

Further changes for 2013 came to Can-Am’s X mr in the Max chassis which features 30-inch Silverbacks on 14-inch TIP rims, power steering and also Fox adjustable front and rear suspension. Now with the push of a button, suspension can be changed from the saddle.

For 2013 Can-Am has made some sensible and well-thought out refinements to its lineup lending further credibility to our belief that the side-x-side market remains red hot and the ATV market is growing stronger once again.