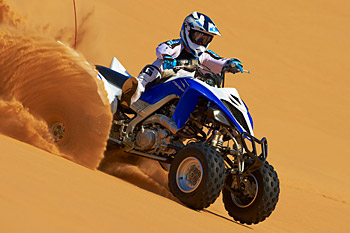 It’s no secret Yamaha has put a choke hold on its competition by earning virtual ownership of the sport ATV category over the past several years.

The segment’s best-selling Raptor 700R’s unmatched performance and versatility is revered by current owners and loathed by the competition.

Yamaha is determined to maintain this dominance by continuing to improve an already near-flawless ride and for 2013 some tweaks to the now “assembled in the U.S.A” Rap are bound to delight prospective buyers even more.

The 2013 Raptor will be available in three versions. The Team Blue/White Raptor 700R, at $300 less than last year’s model.

The 2013 Special Edition Raptor 700R, which sports black plastics with red flame graphics and GYTR accessories is $200 less than the 2012 SE. Lastly the base Raptor 700 is $700 less than last year’s model and comes in white with dual graphic kit options.

The all-white model comes with a Red, White & Blue Assembled in USA themed kit and an aggressive black and red kit. Yes – you get both.

You’ll be pleased to know Yamaha made several modifications to last year’s Raptors but the hard-hitting 686cc liquid-cooled, EFI, four-stroke, five-speed powerplant stays as-is, and for that, we thank you Yamaha.

The new Raptors now feature MAXXIS rubber with reduced weight and an exclusive-for-the-Rap aggressive tread pattern. The “R” versions of the new Raptor 700 still have fully adjustable, aluminum piggy-back type shocks with high and low compression damping so riders can better control their own particular set-up.

So What’s the Difference?

For the base Raptor 700, in order to knock an impressive $700 off the price tag, Yamaha scrapped the piggy back shocks and made the rear shock pre-load adjustable.

All 2013 Raptors were given an extra 50mm of knee space at the front fenders, which will be a welcomed alteration for taller riders.

The tank is a little wider at the seat and the CG is slightly lower while a new twin piston rear disc brake allows for one finger stopping.

Now that the Raptors are being built in Yamaha’s state-of-the-art Newnan, GA manufacturing facility some of the quality controls have been improved even further if you can believe it.

Look for all three versions of the new Raptor 700s in dealerships this summer.

Matt Lester
Matt Lester is an Account Manager for Dirt Trax TV. He is also a Contributing Editor and Guest Correspondent on the show focusing on tourism & adventure segments.
Previous articleBRP REORGANIZES OPERATIONS TO MEET GROWTH
Next articleTOSSING AWAY MY LID