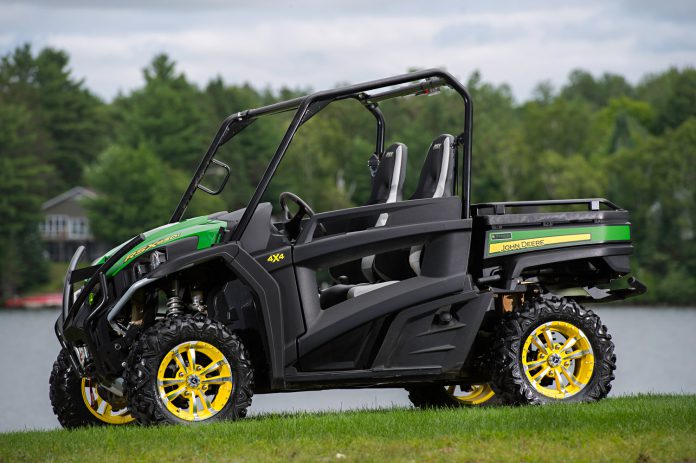 There are MANY utility-attractive features on this SxS, but we can’t help but believe the RSX was first and foremost conceived to be an off-roader’s hot rod.

In the RSX it makes a claimed 62-hp – doesn’t sound like much but it’s power curve is very broad and delivers big-time torque numbers which amp up mid-range acceleration netting hair-straightening hits when the throttle is tipped-in, even at fairly high speeds.

The RSX Sport uses Fox 2.0 monotube gassers on all four corners but these ones don’t have rebound or compression adjusters.

Calibration is very good, however, and we were impressed how well this “optimum performance” suspension handled trail junk – maybe a bit stiffer at low speed but really, really good when the speed is ramped up.

We think the RSX 850 is a breakthrough vehicle for John Deere and its attractiveness reaches the areas performance riders like to play in.

It’s so close to being an all-out performance SxS without getting there, we can’t help but think JD could be planning an onslaught into that territory sooner than later.