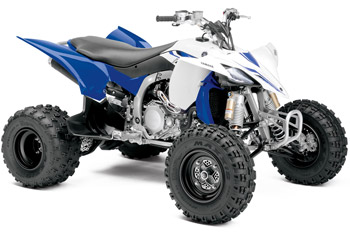 Would tinkering with a formula that is clearly working and opening a window of opportunity for competing OEMs who once had credible success in the Sport market not be a big mistake?

It’s no surprise that in 2014, Yamaha stuck to its guns by minimizing changes to the industry sales-leading Raptor 700R and one of the industry’s highest performing, most technologically advanced Sport ATVs, the YFZ450R.

When the 2014 YFZ450R was first introduced back in June, DirtTrax reported upgrades such as all-new engine settings and more power from its high-tech, quick-revving, titanium 5-valve, 449cc EFI engine. Then there was the news of the lightweight, cast aluminum and steel hybrid chassis.

After spending plenty of aggressive saddle time riding this rocket on the track, on trails and in the dunes at Glamis, California, we’re confident telling you this quad remains, by far, the best sport ATV to ever come out of a Yamaha factory.

We also stand by our decision to name the Yamaha YFZ450R Best In Class in the Sport ATV category. Actually, it was a no-brainer – it’s that good.