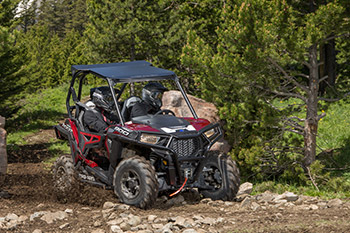 This has been a crazy week for new iron! Polaris pulled the sheets off its 2015 fleet with probably the biggest new model intro of the year.

The astute observer will notice the disappearance of a few legendary powerplants and their welcome replacements have us pondering the reaction from competitive OEMs.

You’ll notice Polaris chose to pretty much shelve its 800 twin in 2015. This engine has resided in the wildly popular 50-inch wide RZR amongst other vehicles in the fleet.

We think this might in part be a reaction to Arctic Cat’s Wildcat Trail, which although only a 700, claimed to top Polaris’ mill with 60-plus horsepower. Along with a few other sweet features like upgraded Fox shocks, half doors, a Team Rapid Response Clutch and a lower price tag, we speculated earlier that Polaris would really have to up its game to stay competitive and that appears to be exactly what the companys done.

For 2015 Polaris has added some cool updates to its base RZR like beautifully crafted half-doors, a slightly longer wheelbase for bridging big bumps, upgraded seats and for its biggest shocker, Polaris engineers tucked the popular ProStar 900 into the 50-inch wide RZR, delivering a significant increase in power to 75 ponies!

We have to wonder for one, what the response will be from Arctic Cat in the next evolution of the Wildcat. Furthermore, when and if Can-Am steps into the 50-inch wide SxS arena, how will the Quebec-based manufacturer choose to compete against such a worthy adversary?