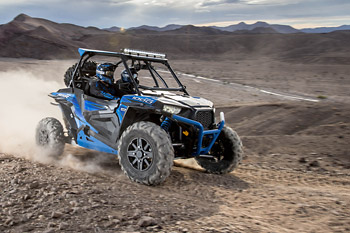 In what may be the most intriguing marketing move weve seen this year, Polaris just announced the new 2015 RZR 1000 will get a three – yep, just three – horsepower increase over last year’s 107-hp claim for the original.

If you’re like us you’re probably wondering, “Why bother”? After all, three ponies amounts to about a three percent power-up – not exactly pulse pounding. Here’s what the minds at DirtTrax think is going on.

BRP has made it known it will always offer the highest performing model in every segment it does business in. The company has pretty much put its money where its mouth is when it comes to ATVs, snowmobiles and watercraft. BRP consistently stomps on the competition with big power and class leading performance.

Remember, the original RZR XP900 produced 88-hp from its parallel twin. The XP 900 sat alone at the top of the horsepower mountain for over two years. Even Arctic Cat’s Wildcat 1000 when introduced, did not eclipse the RZR XP 900’s 88-horse claim.

We were solidly convinced when Can-Am launched its Maverick targeted directly at the XP 900 and the Wildcat 1000, it would push the limits of SxS power over the 100-hp threshold. Guess what? The Maverick came out the box with a torque-blessed 101-hp, 1000cc V-twin.

The Maverick definitely mowed the Polaris RZR’s lawn – and not by a little bit. Making matters worse, Arctic Cat came back with a mid 90s HP update to its 1000cc V- twin.

In a manner we can only describe as voracious, Polaris not only defended its Pure Sport SxS turf but plowed the competition into the ground with the all-new RZR XP1000 producing an obscene 107-hp. Were pretty sure the competition was not impressed.

So, why is Polaris crowing about a three horsepower bump to 110? We think it goes like this: Polaris knows its strongest competitors (Cat and Can-Am) won’t sit still in 2015 and will declare 110-hp as the standard.

Simply stated, Polaris just took out horsepower insurance – and believes three ponies will do the trick!