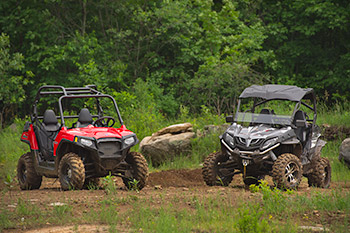 This is the first off-shore manufacturer to jump into the pool head-first with a totally sport-focused SxS, the ZForce 800 EX.

The first feedback we got was that this unit is a rip-off of the RZR. Truthfully, the Wildcat Trail took the same abuse when it was released and the two look as completely different as two 50-inch-wide side-x-sides can possibly look. Its like saying a Ford is a rip-off of a Chevy because they both have a cab and a box.

Park a RZR and a ZForce next to each other and you’ll discover there’s a ton of technical differences between the two and, yes, even in the way they look!

Mechanically, there’s very little crossover – certainly no more than what you’d find from a Can-Am or a Cat compared to a RZR.

Weve recently returned from CFMoto’s manufacturing plant in China and were happy to see a strong focus on quality control and a sincere willingness to accept input from North American customers and engineers.

Clutching on these units is from Quebec-based manufacturer CVTech and many models feature compression and rebound adjustable Elka shocks – arguably one of the finest shock manufacturers in the industry.

Aesthetic and geometric differences are significant enough the ZForce is unique and its option package makes it a very appealing vehicle to consider in this class.

Wed like to see CFMoto continue to grow its dealer network across North America and watch its continued focus on quality control put the company in a place where it can grab more of the market.

For now, well continue to run our ZForce 800 to its limits and remain cautiously optimistic as we evaluate.

Mike Lester
Mike Lester is Staff Photographer and Digital Content Manager for Dirt Trax TV. He is also a Contributing Editor and Guest Correspondent on the show.
Previous articleRobinson and Cecco Podium with their Scramblers
Next article2015 RZR XP 1000: BUYING HORSEPOWER INSURANCE!