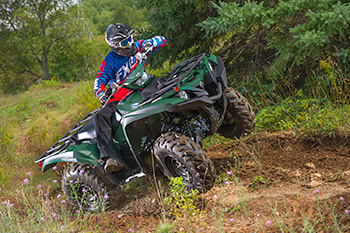 DirtTrax has had a love affair with Yamaha’s Grizzly since the latenineties. The company has continued to evolve its biggest sport-ute ATV, stirring-in more power then adding independent rear suspension in the early part of the 2000s.

Since the Yamaha 2016 ATV media introduction last summer, DirtTrax has been able to put some quality saddle time on the latest version of the Grizzly. Here’s a look at some of those improvements and we’ll tell you what we think after some riding time with this newly improved Yamaha.

The 2016 Grizzly’s DOHC single has been upgraded to 708ccs. Mapping changes to this 4-valve, EFI dynamo of an engine and a revision of its CVT transmission have increased overall power and response by 6-percent. Torque alone (always one of the Grizzly’s strong points) is up 9-percent. The new 708cc mill’s air intake system has been completely re-vamped providing much better air flow into the cylinder. Drivetrain calibration uses slightly lower gearing and lighter primary clutch flyweights maximize the twin cams love of RPM.

If you’ve spent time on the former 700, you’ll definitely notice an improvement in top end speed but in our opinion, it’s the Grizzly’s low to mid range torque that really gets the adrenaline flowing.

One of the things we’ve always loved about the Grizzly is its lightweight feel at the handlebars and its quick, precise handling and ability to carve sharp esses at speed. Some of our test riders under 6-feet-tall tell us it fits like a glove, which translates into confident riding in gnarly conditions.

Although Yamaha has made a few subtle design changes like a slightly taller stance and longer seat, we were pleased the new version still provides the same confidence-inspiring ride. Yamaha has gone to its proven wide-arc A-arm setup for better ground clearance plus a little more front suspension stroke and although we’ve always been satisfied with ground clearance and suspension on the prior Grizzly, the subtle improvements this year have helped provide easier escape over trail junk and an overall plusher ride.

Besides the all-new chassis, the 2016 Grizzly has redesigned front and rear fenders and a new handlebar mounted headlight.

Yamaha was first into production with electronic power steering and the engineers continue to do a stellar job with it. The terrain where we do most of our testing is very rocky and the trails are tight and winding. Yamaha’s EPS nearly completely eliminates handlebar whip resulting in less fatigue and no trace of arm pump. You can order your new Grizzly without EPS but you’ll hate yourself for doing it.

Some of our riders felt there was still room for improvement but all agreed the brakes on the Grizzly have come a long way over the years. Some of our testers also prefer a single lever braking system over separate front and rear levers. It’s strictly a matter of preference and a constant source of disagreement in our garage.

There were times we found the gear lever to be a little finicky as well. As it turned out, it was mostly driver error causing the problem. As long as you use the rear foot brake when shifting into park, reverse etc., the gear shifter works like a charm.

The rear tool storage box behind the seat could use a better locking mechanism. We found out the hard way this is not the best place to carry extra water bottles. If things get bouncing around in there, the box will pop open. We’re pretty sure Yamaha knows about this and is finding a solution.

Last, the new storage container built into the front seat cockpit area is quite roomy but it gets toasty warm in there. We were considering wrapping marshmallows and chocolate in foil to see if we could make S’mores. It’s a good spot to carry gloves on a cold day but perhaps not the best for keeping drinks cool on a warm day.

The Grizzly is one of the most steadfast and enduring brands in the ATV biz. Its reputation has been built on light overall weight, nimble handling and a bulletproof engine and driveline. This newest version has shunned change for the sake of change and instead has opted for refinement.

The newest Grizzly works better because it’s still a Grizzly, not a completely new set of blueprints. Get our drift?

Matt Lester
Matt Lester is an Account Manager for Dirt Trax TV. He is also a Contributing Editor and Guest Correspondent on the show focusing on tourism & adventure segments.
Previous article2016 KAWASAKI TERYX AT HATFIELD MCCOY
Next articleWINCHING 101