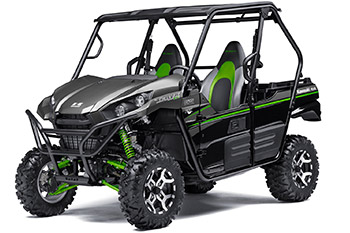 During the holidays we received an invite to join Kawasaki in mid-January to try out the 2016 Kawasaki Teryx in the mountains of West Virginia. It’s always great getting a chance to ride the Hatfield McCoy Trails, but we were a bit worried when we started seeing the news about Winter Storm, Jonas.

Just three days before our ride, the storm dumped about 18 inches of snow on southern West Virginia but Kawasaki reassured us the adventure was on and we were up for the challenge.

The trip started with a Kawasaki Product Manager, Kevin Mann, giving a detailed walk-around of the 2016 Teryx and Teryx4. The Teryx platform is a mix of both sport and utility and the 4-seater Teryx4 is an ideal vehicle for family adventuring.

The first thing we noticed was the new aggressive styling of the front end, including four LED headlights on the LE and Camo models that offer regular and high beam and are controlled by two separate switches.

Access to the hood has changed from front hinge to an easily removable panel. In the cockpit, there are even more changes as Kawasaki added tilt steering and an over-molded steering wheel. The front seat is now easily adjustable into three positions without the need for any tools. Kawasaki also added a new dash with a carbon fiber-styled look that includes knockout places for accessory switches as well as an area specifically shaped for a Jenson radio and speakers.

Under the hood, Kawasaki has continued to use its muscular 783cc DOHC V-Twin paired with Kawasaki’s belt driven CVT. On this ride the CVT would definitely be put to the test, as engine braking was paramount on the slushy trails.

One of the most noticeable changes to the 2016 Teryx is new suspension calibration on the FOX Podium 2.0 shocks. While still offering eight inches of travel in the front and 8.3 inches in the rear, the new spring and damping settings offer a plusher ride and better control in rough terrain.

The two-seat Teryx still features two 24-gallon storage boxes that close from the top and these proved to be a great asset, keeping our gear out of the elements. The 600-lb cargo capacity tilt bed also features Kawasaki’s Quick Release (KQR) rails. The four-seat model has a smaller cargo area with 250-lbs of storage and features theater-style raised seating for the rear passengers.

Once the walk-around was finished we geared up, including thick gloves and a balaclava under our helmets and made our way to the trailhead. With expert drivers from the Hatfield McCoy Trails leading the way, we made a slow ascent up into the mountains on the Rockhouse Trail. This trail was aptly named as it seemed to be carved straight out of the hard rocky mountainside. On this trip the fresh snow covered the rocks so deeply we rarely noticed they were even there.

As we continued on our trek from Man, West Virginia to Gilbert, we gradually picked up the pace as everyone in the group became more accustomed to the conditions.

It was here the Teryx’s new suspension settings became really noticeable. The ride felt smoother than in the past and, at one of the photo stops, we made an adjustment on all four corners to make it a little stiffer. This adjustment worked out perfectly as we picked up speed in one of the valleys, cruising along in slushy snow at full throttle.

Just before the Gilbert trailhead there was a long downhill section where we shifted into low gear to see how well the engine braking would handle the icy conditions. We descended the icy trail without once touching the brake pedal.

We finished the 25-mile journey to Gilbert right around lunchtime and the rain started to fall while we were at the restaurant and then slowed considerably as we headed back to the trails. The rain added to the slush and also the fun as we were able to pick up the pace on the way back to Man. After 50 miles of trouble free riding in a winter wonderland our adventure was over.

Rather than creating a problem, the snow made the trip more memorable and gave us the unique opportunity to test the Teryx under a whole new set of circumstances. We’re glad for the weather and it underscored what a versatile SxS the Teryx is.