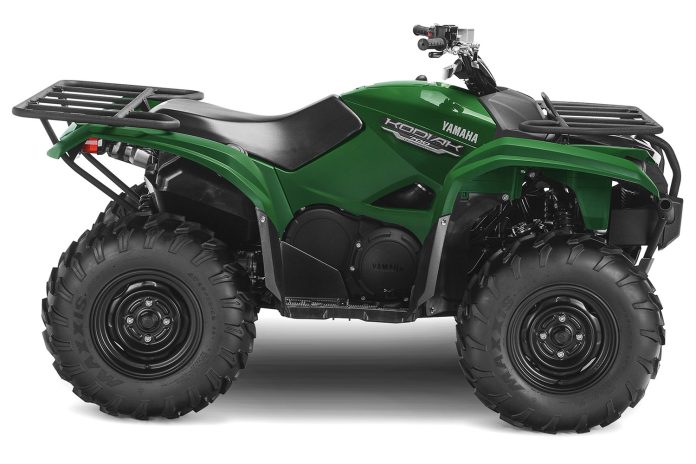 Back in 2015 when the 2016 Kodiak 700 was first introduced, Yamaha also introduced a brand new Grizzly 700. The Grizzly was intended to go higher on the performance scale with better shocks, different CVT clutch calibration and a fresh chassis with new bodywork.

Meanwhile, the Kodiak 700 was based on the former Grizzly model’s geometry and had a slightly detuned Grizzly engine with the CVT set up for very smooth engagement and slower shift-up.

The idea was that the utility market wanted a low cost alternative with plenty of low-end power for towing, lugging, climbing and hauling – not something you’d compete with at the Bonneville Salt Flats.

The Kodiak uses the same basic 708cc twin-cammer as the Grizzly but its set-up allows for emphasis on torque rather than RPM. Yes, it is utility focused but in actual fact, it’s a great performer, too.

Interestingly, this year there are pimped-out versions of the Kodiak 700 with aluminum wheels and EPS – and these are really attractive ATVs sure to draw glances even from shoppers looking at a performance Sport-Ute at a really good price.

Since the conversation here is about getting the most ATV for your money, we’re focusing primarily on the baseline Kodiak 700. Its pricing isn’t nearly as attractive as Cats VLX ($6,999.00 USD. $8,649.00 CDN) but the cost is still well under ten grand and that’s saying a lot for big bore ATVs these days.

Standing back and squinting at it, there’s no mistaking the base Kodiak for the Deluxe version. It has blacked-out plain-Jane wheels with fairly slippery Maxxim donuts and not much to show in the way of external glitz and glamor.

Underneath however, the Kodiak is a serious piece of equipment that has nearly all the time-proven features the Grizzly has brought to market for years.

It uses Yamaha’s super-durable Ultramatic CVT and On-Command 4WD albeit without diff-lock. If you ante up for the SE, you can get diff-lock and we strongly recommend it.

Yamaha uses heavier primary clutch weights to soften the Kodies engagement and to keep the engine pulling at the peak of its power curve – great for hauling loads. A fully enclosed “wet brake” is used at the rear axle (hydraulic discs up front). This brake design is strong, linear acting and lasts forever.

Here are some thoughtful things targeted at the utility user. The Kodiak actually comes with thicker plastic body panels than other Yamahas. The idea is it needs to withstand the abuse from abrasion (trees, rocks etc.) because of its utility designation. The track width of the Kodiak is also slightly narrower than the Grizzly so it fits into tighter spaces when riding off-trail.

The heart of the Kodiak is its immense torque output. It is targeted at what you need – not necessarily what you think you want.

It is light, nimble and gets the job done whether you’re using it as a workhorse or if you’re recreating.