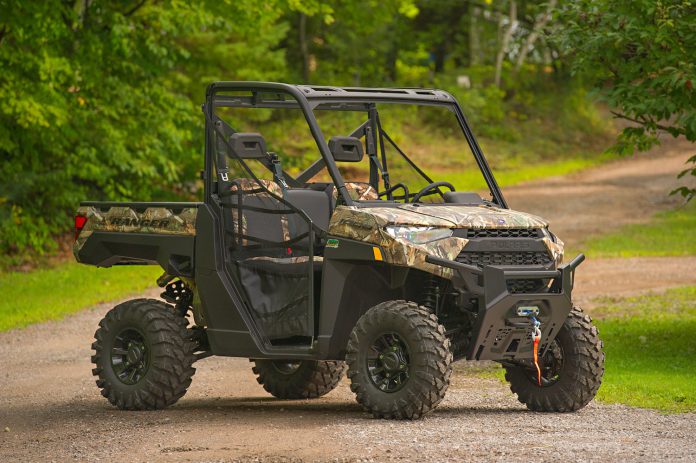 The 2019 Polaris Ranger 1000 showed up at our home base recently and we’ve had a chance to put a few miles on it. Here are some of our initial impressions.

The introduction of Can-Am’s intelligently and carefully thought out Defender seemed to have put some pressure on the world’s best selling utility vehicle and some big changes were made to Ranger once heads started turning towards the Can-Am.

For 2018, the Ranger was completely overhauled and utilizing Can-Am’s research model, Ranger engineers interviewed the farming community to find out exactly how it uses the Ranger. This info resulted in more than a hundred innovations to a completely new Ranger.

An additional inch of ground clearance brought the Ranger up to 13-inches. The largest stock front bumper in the industry and an integrated and pre-wired winch mount for easy install was part of the redo. In an upcoming DirtTrax segment you’ll learn about the new, comfier seats thanks to an extra inch of foam added to cushion your cheeks.

One thing we’re particularly impressed with is the incredible storage in the cab area. An additional closing glove box has been added and the original was made larger.

There’s also loads of under-dash storage stretching the width of the cab for holding a jacket, gear or lunch boxes – just about anything that doesnt need to be tied down.

The passenger seat flips-up to expose a flat floor (similar to underseat storage on the Defender) and cutouts for a 5-gallon pail or space for your dog or whatever else is conveniently located on the passenger side.

Power steering has been calibrated to perfection now rivaling the Defender, which we felt was the new benchmark following its release and cornering and handling in the Ranger XP 1000 feels balanced and nimble respectively.

Here’s another cool thing: Turning radius was reduced by 13 percent. You’ll find this immediately noticeable and it feels like you could do donuts around a nickel all day long.

The biggest difference is in the ride. Several modes are available from Normal, to Work, to Performance at the toggle of a switch. In Performance mode, the Ranger delivers some pretty exciting action as you unleash heaping loads of ungoverned power.

From the first mash of the accelerator, you can feel the difference in the recalibrated clutching. There’s no jerky feedback when upshifting or backshifting and acceleration is smooth and linear. Pedal pressure is absolutely perfect.

Well be putting the 2019 Polaris Ranger XP 1000 through its paces, so keep your eyes open for the full TEST RIDE coming up this season on DirtTrax Television!