4-SEATERS PROVIDING YOU WITH OPTIONS 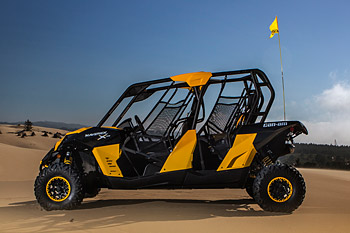 In 2012 we noticed quite a few four seater side-x-sides hitting the dealer floors and with more likely on the way in 2013 the war of the battle-wagon is officially on.

With a longer frame and an extra row of seats to bring family and friends along for the ride, these models are becoming very popular. The kind of handling improvement that comes along with the extra length is attractive as well.

John Deere has had a multi passenger UTV for a while but in the spotlight this year the most radical of the offerings in our industry had to be the Polaris RZR4 XP900. This brutally powerful multi passenger machine made you feel like you could give every member of the family a ride of their life!

It wasnt long until other manufacturers announced their high-horsepower sporty four-seaters like Can-Ams multi seat Maverick due out in the early months of 2013. Arctic Cat also announced an extra row of seats in a stretched out iteration of the Wildcat.

Kawasaki unleashed what has been to most well received pure family adventure machine in the Teryx4 made for the more relaxed touring adventurers on your list.
Its a great handler and ready to rip when you press the pedal.

The SXS industry is red hot right now and getting a great package for the entire family can be found virtually anywhere!

So the big question is, would you buy a four seater?