A WARNING TO IMPAIRED RIDERS 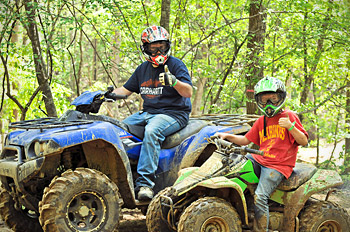 According to the Motorcycle Safety Foundation riding under the influence dramatically impairs a rider’s ability to operate a motorized vehicle – especially affecting vision and judgment.

How many times have you seen someone having a beer or a couple drinks before hitting the trail with friends on an ATV or SxS? Its pretty likely that the group he’s riding with has probably had a few themselves too.

Its likely their riding skills have been affected as a result and maybe they’re weaving all over the trail with disregard for oncoming riders, like you and your kids.

Lets imagine for a second that on this ride there’s an accident. Someone veered off-trail and hit a tree hard or worse, hit an oncoming family of riders. Someone gets seriously injured or worse yet, someone dies.

I have to wonder whether people who choose to ride impaired would recognize where the problem started in this scenario and there’s a slim chance they’ve ever considered this outcome.

I honestly have to wonder whether this entire group of riders would even learn from a tragedy like this and continue to endanger themselves and others around them.

Operating an ATV or side-x-side while under the influence of drugs or alcohol is just plain stupid and we take a zero tolerance approach to it.

If you’ve already had a few, think about how your actions could affect someone you care about and leave it parked for the day.

If someone you’re planning to ride with is under the influence, take a stand because the person he hurts could be you or me.