AIRING OUT THE WILDCAT 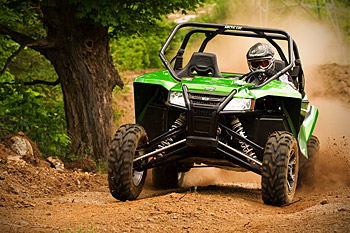 Man, is it ever great to be out on the set again! Being the producers of two amazing powersports shows one that focuses on snowmobiling and of course the other being Dirt Trax, we have a transitional period from when the snow melts until we begin shooting in the spring.

Though this wasn’t my first ride of the season, I was able to lock Luke down for an hour or two to do some production photography out at our top-secret test track.

If you’re following us on Facebook, you probably saw the photo of him airing out the Wildcat this weekend and if youre not following us, GET ON IT!

During our shoot I was privileged to take a lap or two around the track, perched shotgun while Luke drove. I can tell you without even a snicker that this topped any ride at Six Flags and the general public would willingly pay a hefty admission fee just to take one ride.

It’s that crazy, it’s that insane and if I hadn’t already gone beforehand, I probably would have needed to change my pants.

As he wound around each corner, Luke stomped the throttle to achieve maximum air and the ridiculously long legs of the Wildcat’s rear suspension soaked up the landings leaving both the driver and passenger pain-free and ready for more.

My biggest gripe about sitting passenger in the Wildcat as addressed in an earlier post after my first ride in Barstow California last fall is the lack of a grab bar.

I was hopeful that by the time the unit graced dealer showrooms it would be equipped with one, but it just didn’t happen.

My alternative was grip my seat wit both hands and count the seconds from when all four tires left the ground to when they touched back down to earth again. Didn’t matter. Totally worth it.

We’re excited about this upcoming season of Dirt Trax Television and you’ll be seeing the official TEST RIDE of Arctic Cats Wildcat in mid-July complete with a full assessment by Luke.