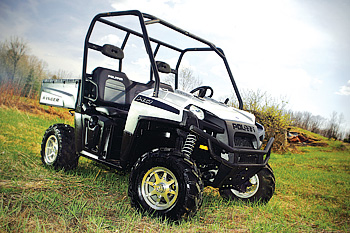 Any of the three UTVs on this page could qualify easily for Best in Class kudos but Polaris has simply overwhelmed us with its revamping of the Ranger into the new and completely re-thought Ranger XP.

We’ve been telling you how important it is for SxS manufacturers to adapt power steering technology to their products and Polaris is first-in with this feature.

We’re not surprised to tell you what a great idea it is. Along with the HD’s self-leveling rear suspension system that can handle enormous cargo loads and still… handle, there’s the Ranger’s switch from struts to double A-arms up front and fresh refinement to nearly every other area of the chassis.

Polaris has sent notice it intends to wow potential buyers with out-of-the-box thinking.

This Ranger sends everyone else back to the drawing board and guarantees the HD will absolutely have to be copied.

With thousands of Rhinos sold, its design speaks much more loudly than any hype we could generate.

Available in a stripped down 450 iteration as well as several versions of an incredibly torquey 700 EFI single, the Rhino hasn’t needed to evolve much since its inception; the engineers got it right from the beginning.

This is a great handling, well equipped UTV that nearly perfectly bridges the gap between off-road performance and workhorse utility.

The Prowler’s rugged construction, great styling and the fact it weds to several different engine variations makes it a solid bet for Best UTV consideration.

The 550 is particularly appealing because of its torquey EFI ‘hemi’ engine and full compliment of 4WD features.

Like all Arctic Cats, the Prowler boasts enormous ground clearance and a number of unique features like a 2-inch hitch receiver, large underhood storage and a durable composite cargo box.