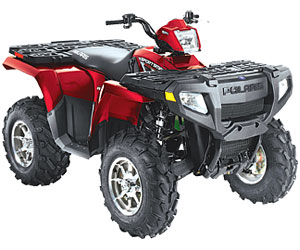 Yup, Polaris took this class last year and wouldn’t you know it, the new and significantly pumped up 800 Sportsman conclusively aced it again this year.

Need justification? The biggest Sportsman still delivers the best ride and the best handling among all competitors in 2008.

The silky response to trail junk coming from the most refined and best calibrated front and rear suspensions in the class is impossible to overlook among the impressive competition in this segment. Simply stated, the Sportsman is the easiest to ride either fast or slow on the widest variety of terrain.

If we could say anything to the competition it would be this: While competitive Big Bores are riding better, none can approach the predictable and linear handling the Sportsman delivers.

One more thing, the 10 percent injection of extra squeeze from this engine is noticeable and welcome in 2008. The extra power, while still not as strong as the beastly Outlander 800HO, is very impressive.

There are two impressive bridesmaids in this class, not the least of which is the imposing 800 Outlander HO.

We have to admit, it was close for the win as a result of a recalibration to the Outlander’s front and rear suspensions.

There’s no need to review the 800 Outlander’s performance potential. If it was only about power, here’s the champion of the ATV universe.

Yamaha’s Grizzly 700FI with or without power steering has moved Yamaha up the Big Bore ladder significantly.

The addition of power steering has opened up a whole new world of freedom and low effort control for those who can’t live without 27-inch mud tires.

Don’t be afraid to take advantage of the non-EPS 700, either. It’s a great ride at a reduced price.

Dirt Trax Onlinehttps://www.atvmag.com
Check back frequently for new content and follow us on social media!
Previous articleWarn Introduces the Ultimate UTV Winch
Next articleWill My Modified 500 Outlaw Beat A KTM 525?