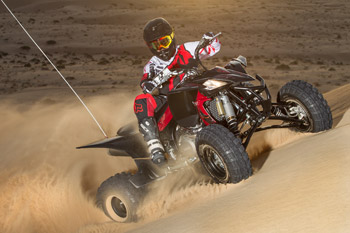 The ATV Sport market has had one sovereign ruler for the past several years and Yamaha has no plans of letting the competition have access to its coveted throne anytime soon.

Tinkering with a formula that is clearly working for Yamaha, by opening a window of opportunity for competing OEMs who once had credible success in the Sport market, would be remiss as market share percentage points in this waning, but extremely passionate, segment are not easy to earn.

So it comes as no surprise that for 2014, Yamaha has chosen to stick to their guns by minimalizing changes to the industry sales-leading Raptor 700R and the industry’s highest performance, most technologically advanced sport ATV, the YFZ450R.

You might recall when the 2014 YFZ450R was first introduced back in June, DirtTrax reported upgrades such as all-new engine settings and more power from its high-tech, quick-revving, titanium five-valve, 449cc fuel-injected motor, all sitting in a lightweight, cast aluminum-steel chassis.

After spending oodles of aggressive saddle time riding this rocket on the track, on trails and recently in the dunes at Glamis, we’re confident in our qualified evaluation that this quad remains, by far, the best sport ATV to ever come out of an OEM factory.

We also stand by our decision to name the Yamaha YFZ450R Best In Class in the Sport ATV category. Actually – it was a no-brainer. Yes, it’s that good.

In June 2013 the 2014 YFZ450R was introduced and received a significant makeover at that time so nobody should be shocked major changes weren’t introduced just half a year later.

To jog your memory though, you might recall for 2014 the YFZ received an industry-exclusive standard assist and slipper clutch along with new styling and body configuration providing more space and comfort in the seating position.

The new YFZs also feature Maxxis tires and quick release fasteners allowing for no-tool installation and removal of the front and rear fenders.

Look for the full story, as well as more details on the Raptor 700R in the May issue of DirtTrax Magazine.