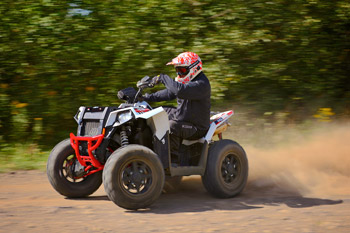 When Polaris introduced the completely revamped Scrambler 850 just a few seasons ago, it quickly became one of our favorite ATVs on the market.

As soon as the RZR XP1K rolled out this past summer we had a strong feeling a Scrambler XP1K wouldn’t be too far behind and by fall we werent left disappointed.

At first glance you’d probably mistake the Scrambler XP 1000 for its smaller bore sibling and in reality, it is every bit a Scrambler.

Swing you leg over the seat and fire up the 952cc twin and by the first press of the fun button youll quickly realize it has more power than any other ATV ever made. In fact, as impressive as the Scrambler 850 is the power from the 1000 isn’t even comparable, it’s downright unbelievable.

Turn the key and as the 89-horsepower mill fires to life you’ll be under the spell of the melodic rumble emitting from the Scrambler XP 1000’s ultra-cool looking high-flow dual exhaust system.

As you lay down the hammer through your favorite section of trail, the exhaust’s confident roar commands more respect than a hungry lion at feeding time and if you thought the 850 sounded wild, well…double that.

Smoothing out the ride are Premium Fox Podium X 2.0 shocks with 18-click compression adjustability so you can basically dial in your ride for just about any terrain. Pair this with Polaris’ true All-Wheel Drive system that automatically engages all four tires at the first sense of the back wheels slipping and you’ve got a boat load of traction that can tackle just about any terrain imaginable.

Confidently tackle rooted up, rock-strewn trails with the throttle figuratively taped to the bars and the electronic power steering soaks up trail chatter and limits arm pump.

You can ride all day and the feather-light handling won’t leave you with an aching back and sore shoulders. As we always say, if you haven’t ridden an ATV with EPS, you don’t know what you’re missing!

The Scramber XP 1000 truly is a high performance piece of equipment boasting more power than most riders could even handle at full throttle. The reality is though its power is usable and controllable and in the right hands this beast can be tamed and will take your riding experience to an entirely new level.

Watch for more in an upcoming issue of DirtTrax Magazine and see the full test ride when DirtTrax Television returns in June!