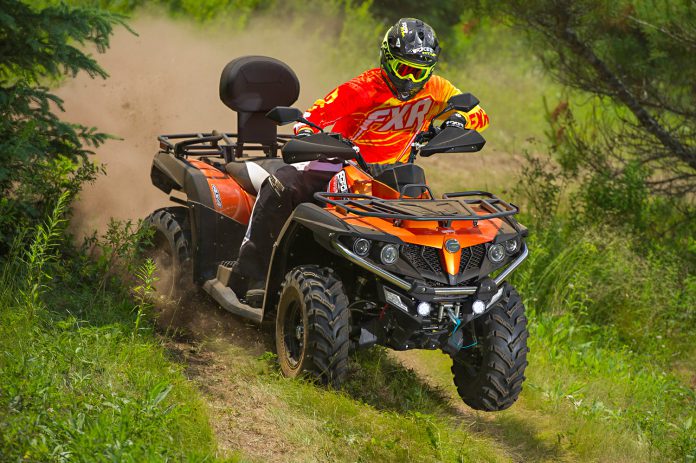 CFMOTO’s calling card has always been about offering you more features than the competition for a price that’s very close or even less than theirs.

What with so many ATV manufacturers using off-shore resources today to build parts and components that “appear” to be built in North America, the price gap has been closing as the more established builders try to hold the line on pricing and compete with the Asian OEMs.

Ultimately, the winner is the consumer, who is saving dollars and getting the same or more bang for the buck.

One of CFMOTO’s best value offerings is the CForce 500. Not only is it loaded with goodies like double A-arm independent suspension, selectable 4×4 with diff-lock and nice looking aluminum wheels, but it’s powered by a potent 493cc 4-valve single with EFI .

Perhaps the most obvious feature you won’t find on any other model in this review is its extended wheelbase that offers 2-up seating with a backrest for the rear passenger – no extra charge.

Some would argue 2-place accommodation isn’t what they’re necessarily looking for but it sure is nice to have that possibility when youre buying a new ATV – and the extra length pays big dividends in the mud.

Other goodies include full-featured digital instrumentation, a 5-gallon fuel tank and a 2-inch receiver out back. Get this: There’s even a 2500-lb winch out front included in the price.

This is a sick list of stuff and if you want to spend a few hundred bucks more, you can upgrade to power steering on the CForce 500HO EPS.

On that model the HO means the engine has been significantly amped upwards in power to exceed the former CForce 600 it replaces. Obviously, we feel the “base” version is still very strong competition for any of the other ATVs in this comparison.

None of this would hold much weight if the company didn’t back its product and dealers were unhappy carrying the CFMoto name. Not the case. The dealers we’ve spoken to have a ton of confidence in CFMOTO’s parts and dealer support and see a bright future for the company.

We’ve ridden the CForce 500 and continue to be impressed with its quality of finish and the way its controls and systems operate. We haven’t determined any quirky behavior in its 4WD, handling, ride or braking and on the whole, the vehicle feels like a very together piece of equipment.