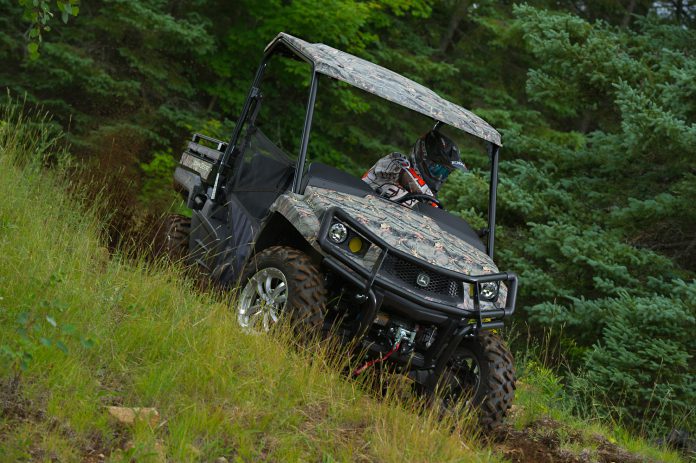 John Deere has proven its commitment to the SxS business by delivering some very effective recreational off-road machinery the last few years.

The company’s high-end line-up is especially interesting and after extensive testing of at least two models, the RSX 860i and the XUV 825i, has really wowed us.

John Deere designs and builds its own chassis platforms but uses engines from an assortment of sources.

In its top performance series, Piaggio supplies the sporty RSX 860i’s V-twin and Chery supplies the velvet smooth inline triple for the utility-targeted XUV 825i.

Incidentally, that same triple is used in Kawasakis latest Mule, the Pro FX, and its one of the nicest engines weve ever plied in a SxS.

When it comes to chassis details, John Deere really goes the extra mile to ensure its customers will have a positive long-term ownership experience.

Each of these vehicles are tightly engineered and in some cases built like battleships to guarantee reliability and durability.

It’s not merely presumed by the product development people that John Deere vehicles will be subjected to some severe abuse; it’s fully expected.

Thus, a company that builds half-million-dollar farm equipment and some of the world’s most reputed construction vehicles applies the same formula to its rec stuff.

The truth is, though, JD side-by-sides are much, much more than indus- trial. The RSX 860i is a genuine contender against semi-sport vehicles like the Polaris General and the Can-Am Commander.

Having had plenty of exposure to the Polaris Ranger and the Arctic Cat Prowler, we were abso-lutely stunned by the driving experience we had with JDs XUV 825i and found ourselves magnetically drawn to it in the presence of those other two.

So, the new XUV 590’s bloodlines are very good. It looks for-all-the-world like a milder version of the RSX and appears to share many of its body panels.

The 586cc Cheri-built inline twin delivers 32-horsepower at 5600 rpm – a fairly high power curve but we’ve been impressed with how John Deere focuses on torque curves over power curves so its vehicles can tow and haul with maximum efficiency.

The EFI-equipped 590 delivers on this count and the engine feels strong on the trails and handles loads very competently.

Since JD has targeted the 590 at a different audience than either the XUV 825i or the RSX, there are some downgrades. For instance, the 590 uses nets instead of doors and doesn’t have the premium bed rails and deluxe seating of the RSX. Naturally, the wheels are not as flashy either. However, a very good double A-arm suspension with pre-load adjustable hydraulic shocks at all four wheels delivers an excellent ride.

You can order the 590 with aluminum wheels and EPS if you wish but as usual, it puts it in a different price category.

We’ve come to respect JD’s 4-wheel drive systems on all its vehicles. The 590 offers selectable 2-4WD using a mechanical lever located on the dash and a third position that locks the differential.

Traction is good and the system gives very positive results without fuss. It’s here we’d suggest moving up to the premium tire and wheel package if youre doing a lot of mud running, but truthfully, the baseline tires are completely adequate for about 80-percent of the terrain you’ll encounter off-road and dare we say, better than most base tires offered by the competition.

John Deere’s dealer network is the envy of every other manufacturer and the number of dealers displaying the JD shingle worldwide probably exceeds or meets auto companies like Toyota, GM and Ford.

If we could be critical of one thing it’s John Deere’s obeyance to governing their SxSs to speeds that are too conservative. The 590 sits at 45-mph and we all know it’s simply about product liability avoidance.

Truth is, that speed limitation is probably adequate for the highest percentage of users but dang it, sometimes you just want to tear it up a bit!

Wed love to see the corporate legal eagles back off a bit but you know how that goes these days.

Yes, the 590i is a bit more expensive than some of its same-class competitors but if you compare it feature-for-feature, in most cases your getting more for your buck.

We think it’s an extremely good vehicle and completely worthy of close examination by shoppers in the medium performance class.