DO YOU REALLY NEED A WINCH? 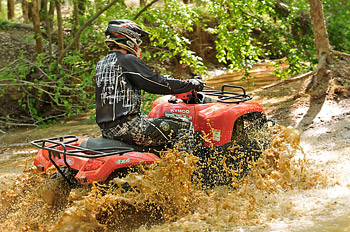 After a long, day of shooting photos for the upcoming issue of Dirt Trax Magazine, I needed to unwind and a high-speed blast aboard one of the many press units parked outside Dirt Trax World Headquarters would be just the ticket.

I hopped on a sport ute and took off towards the trailhead. It had been particularly warm and dry in the week leading up to this day and what is usually a treacherous, mud-strewn nightmare had mostly dried up leaving only the occasional muck puddle to tackle.

As I advanced down the trail system though, there were still some over-the-tires, muddy bogs stretching up to thirty yards in length. I just dropped into low range, made sure I was in 4-wheel drive and squeezed the annoying diff lock lever on this particular model cautiously barreling through each quagmire in my path. This went on for several miles until I finally encountered one just too big and decided to turn around and head back.

As I roared down the trail, I got a bit overconfident and allowed a combination of events to unfold. As I approached one particular pit (that Id already passed though going the other direction) I neglected to engage 4-wheel drive and then also chose the wrong line. I was two-thirds of the way through when my rear wheels started spinning and buried themselves up over the top of the treads in chocolate as thick as cake batter.

Still optimistic I stepped off the floorboards into mud up to my knees and trudged out behind the ATV to see how bad I was stuck. The line Id chosen had apparently been the victim of an appropriately equipped mud bogger and my ATVs skid plate was teetering right in between the outside tire marks. BRUTAL!

As I sloshed around to the front of the ATV to unwind the winch cable, I came to the shocking realization that this unit was not equipped with a winch – A sobering reality that I had neglected to confirm before heading out.

I was in it knee-deep trying everything. Now in low range with 4×4 engaged, I held the diff locker and rocked the ATV back and forth thumbing the throttle in bursts. I got branches out of the woods and piled them up under each tire, I got frustrated and hammered the throttle once only to have the tires spin up mud all over me, I even spewed out a series of expletives that wouldve gotten my mouth washed out with soap even now! Nothing worked.

There I stood defeated, in the mud, covered head to toe in chocolate goop, hot, tired discouraged and just about to pull the key and make the miserable hike back to camp on foot when I heard the familiar tones of a 500 Sportsman brapping out of the trail.

I seriously dont think Ive been happier to see anyone in my life – except for maybe my wife after being away from home for a few long days. To top it off, the sun cast a perfect spotlight on the Warn winch bolted to the front of his ATV.

Within five minutes, Id been pulled from the muck and was on the trail heading back to camp. Thanks my new friend Tanner and his awesome Sportsman 500. You saved me a long, long walk.

A winch was voted as the #1 aftermarket accessory for an ATV ahead of tires on our ATVMAG.COM poll. I shouldve checked before heading out to see if my ATV had one and I didnt. The lesson here is that a winch is just a smart idea – especially if youre riding alone. If youre on the fence about buying one, this is one of those decisions you never have post-purchase regrets about.

Mike Lester
Mike Lester is Staff Photographer and Digital Content Manager for Dirt Trax TV. He is also a Contributing Editor and Guest Correspondent on the show.
Previous articleDIRT TRAX MAGAZINE
Next article2012 ARGO: Riders Reign Over Any Terrain