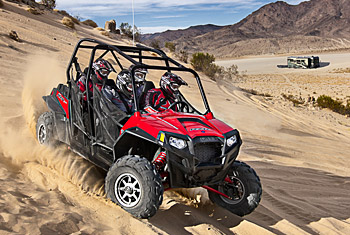 If you could dream up your ultimate ATV or side-x-side what would your design look like?

Would it be low-slung like the Polaris RZR line or maybe a little more like the original Yamaha Rhino?

Would it have a 60-65-inch width or maybe a little narrower at 50-55-inches to fit down most trails?

Personally, I want something that my family can enjoy and when they’ve had enough, I can take out and rock the trails myself. This is exactly where 4-seater side-x-sides like the RZR 4 simply shine.

I have to wonder whether the manufacturers will streamline their current lines to cater more to the enthusiast buying patterns and you can bet there will be more powerful engines available as we move forward.

I recently chatted with a few friends who think Polaris could eliminate the 50-inch RZR 800 because of the overwhelming popularity of the RZR XP900.

Personally, I’m not convinced. Polaris is currently filling the needs for just about every segment of the market. Eliminating this engine size doesn’t make sense, but perhaps a new engine might show its face to replace it sooner than later. Perhaps one based on the ProStar series similar to that available in the XP900 or RZR 570.

The power to weight ratio for the lower yet super powerful displacement of the 570 throws a bit more credibility into this train of thought. The question remains whether the masterminds behind the RZR lineup would make this bold move.

Knowing Polaris as we do, we have to think they’re probably already working on something.