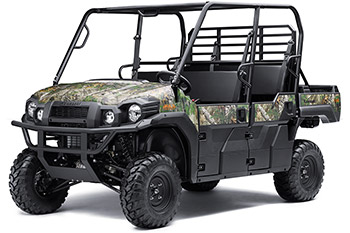 Kawasaki has been knocking them outa the ballpark lately. There was the updated Brute Force in 2012, the updated 4-seater Teryx last season and then again last season came the completely re-vamped Teryx 800 LE. Now we have the rethinking of a vehicle we didn’t expect to impress us this much.

For 2015, Kawasaki has power-washed the drawing board and completely rethought the MULE concept with its all-new MULE PRO FXT.

The MULE or Multi Use Light Equipment (Yeah, we had no idea it was an acronym, either) sees a complete overhaul including its most interesting feature: Trans Cab seating.

This essentially converts a 3-seater bench into an extra row of seating to haul as many as six meat bags in the cab at once. Conversion is remarkably simple and took our inexperienced hands less than 40 seconds to convert.

With a driver and a passenger seated in the bench seats, the MULE PRO FXT handled just about as well as any high end utility side-x-side on the market, even considering its lack of front or rear sway bars. Cornering was flat and on center and never felt unstable even at speed. We would however like to see the addition of sway bars for added stability.

We witnessed the MULE PRO FXT in full production in perhaps the busiest plant weve toured. Everything on this vehicle is manufactured on American soil from the plastics to the frame to bending bots cranking out the ROPS certified roll cages. Heck, theres even a dipping station for applying the Realtree Xtra Green Camo pattern for the camo edition.

This MULE’s engine is a different breed and cranks out torque-laden power via its 812ccs. It’s an inline DOHC 3-cylinder (I says WHAAAAAAT?!) and has enough low-end grunt to pull over a building.

This unique triple cylinder mill happens to be manufactured by Chery – one of the largest and most reputable auto manufacturers in China.

Wait, take your finger off the panic button: Someone else in the off-road industry is already using a Chery-built version of this same engine – and we happen to be quite partial to it! John Deere has been using it in its Gator 825i for a few years now and it happens to be one of our favorites. Seeing it appearing in this all-new MULE PRO FXT brought a grin to our faces.

Theres ridiculous value in the 2015 MULE PRO FXT line. Its impressive in its presentation regardless of the trim level you throw down for. We do, however, highly recommend shelling out a few extra nickels to move up one from base model to ensure you get EPS.

We feel strongly Kawasaki has set the EPS bar for all other UTV manufacturers to rise to. Its automotive-like operation is smooth as silk in 2-wheel drive and offers nearly perfect input locked in 4×4. It’s so good youd have to look twice to be sure you’re not still in 2WD.

The base model starts at less that 13 grand (US), which is competitive considering you can haul yourself and five buddies in one vehicle. You can take them practically anywhere aboard the MULE PRO FXT and its even tougher to put a price tag on that kind of fun.