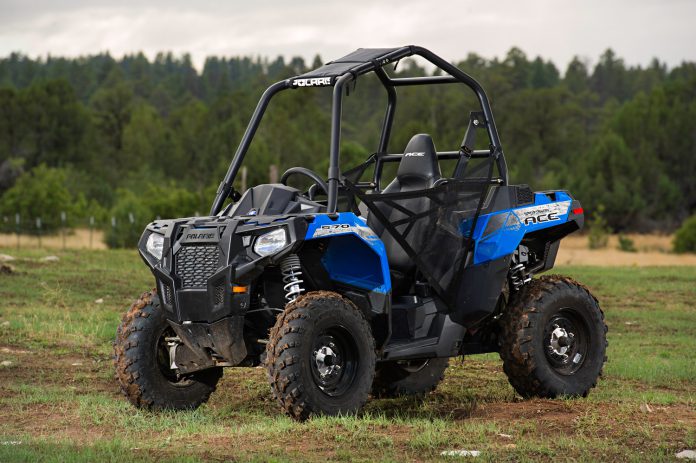 One thing that really impresses us about Polaris is the company’s ability to respond to consumer demand.

Take for instance the ACE. Not even a year ago, the single-seated ride-in ATV was intro’d with its all-new 32-horsepower starting yet again an entirely new offroad segment like Polaris achieved with the RZR not that long ago.

Though stout and most certainly aimed at entry-level riders, smaller females and older riders tired of swinging a leg over an ATV, the common cry we ran into was for more power with the 570 ProStar being the most obvious candidate.

So for model year 2015 in true Polaris fashion, the company pulled the sheets off an all-new ACE with that very same 570 ProStar tucked inside.

The 45 horsepower ProStar is a welcome increase in power from the previous season. The vehicle itself remains relatively unchanged except for this 13-pony gain.

There’s ample power at the press of your foot and power sliding around corners induces giggles inside your helmet while the vehicle remains balanced, corrects and continues on down the trail.

With any progression of power, the obvious question is, “What’s next? MORE, MORE, MORE!!” After having the opportunity to sample the all-new 2015 Sportsman XP 1000 earlier this fall, we get the distinct feeling that mill might work perfectly in the ACE chassis.

The question we’re asking is, will an 88-horsepower ACE be enough to get you into the showroom?