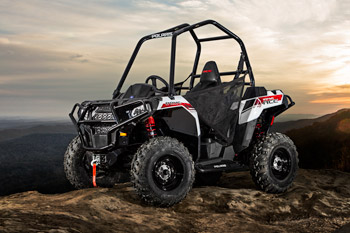 I remember back when the 50-inch wide RZR 800 first rolled through the doors surrounded by smoke and a lightshow at its introduction in Surprise Arizona so many years back. Polaris had created and entire segment that has spawned a wide variety of versions right up to the recently released 107 horsepower XP 1000. This insane growth has our Facebook page lighting up on a regular basis with questions of “What’s next?!” and “Where can Polaris go from here?”

When the horsepower wars are at their peak and prices to own the biggest and baddest seem to be escalating, Polaris has once again pulled a rabbit out of it’s helmet with an entirely new segment thats already receiving a wide range of comments from the offroad community.

The Polaris Sportsman ACE is admittedly a bit odd looking at first when you notice there’s only one seat. Closer inspection reveals the steering wheel and speedo are centered in the dash. Its lines are the perfect marriage of a Sportsman and RZR like these two offroad vehicles spent a wild weekend together and nine months later their love child was born and they named him “ACE”.

The front rack takes on elements of a Sportsman and underneath you’ll find a 2.8 gallon semi-dry storage bin. Need to tie down your cooler or camping supplies? The bed out back looks eerily similar to the RZR’s. You’ll recognize a doorway similar to that of the RZR except when you unbuckle either mesh door and step into your seat, you’ll notice the flat bottom floorboard has no lip to step over which makes getting into and out of this vehicle incredibly easy.

Once you’re seated inside the cockpit, which is surrounded by a ROPS certified roll cage, you can slide your seat forward or back for comfort, which is great if your spouse who rode it last happens to be taller or shorter than you. Your teenager will also appreciate this feature to get distance to the pedals as comfortable as possible.

Turn the key and an all-new ProStar 32-horsepower single roars to life. We’re already seeing Facebookers scoff at what they see as a puny engine unworthy of their attention, but stick with us here – this engine actually rocks! Polaris claims it churns out more power than its own 400 HO and in this chassis which is about the length of a Sportsman 2-up Tourer, there’s plenty of power to keep a novice to intermediate rider happy and provide a few heartfelt giggles when opened up on the trail.

Rounding the first corner in a new vehicle is always a mixed bag of apprehensive excitement. The ACE corners beautifully though even with the accelerator mashed to the floorboards. There’s enough jam to get the ACE sideways, but since you’re seated in the center of the vehicle, you have a balanced feeling like you do on an ATV, plus swaybars add additional stability to keep the vehicle in control. Counter steer quickly and the ACE straightens back up immediately to keep you moving down the trail.

We encountered a variety of terrain during our first ride including chatters, rock-strewn trails and steep hills. The ACE’s MacPherson strut front end and dual A-arms out back suspended by steel-body coilovers behave admirably delivering 8.2-inches and 9.5-inches of travel respectively. Ground clearance is actually ten-and-a-quarter inches, which is more than the 50-inch RZR so you can pass easily over most rocks without tearing up your bellypan. Furthermore, there’s surprisingly little feedback up through the steering wheel while navigating chatter whereas after a day of holding onto handlebars across the same trail system might result in stiff shoulders and serious arm-pump.

The Sportsman ACE clearly isn’t targeted at the XP1K pilot, but maybe he’s got a son or daughter that wants to ride with mom and dad or perhaps throwing your leg over the saddle of your Sportsman is getting tougher, but your passion for trail riding is still as feverish as ever. Doesn’t driving your Sportsman seem like a pretty cool alternative to riding it?

Polaris seems to have the formula figured out for finding a hole in the marketplace and adequately filling it to meet the needs of an un-serviced segment. The company literally created the pure sport SXS segment and the Sportsman ACE just might be the start of something entirely different.