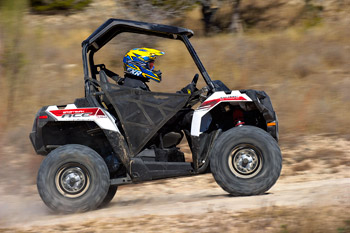 Lots of questions surround Polaris’ latest offering that seems to have the offroad community adequately fired up. So let’s take a closer look at the Sportsman ACE and try to add a bit of factual content to your water-cooler discussions.

You’re right. At first glance it looks weird! Once you get up close to it though and start to understand what it is, it grows on you. The ACE is the perfect union of a Sportsman ATV and RZR, but it’s meant for a single passenger. It’s 48-inches wide (same width as an ATV) and goes anywhere your 570 Sportsman will go. It’s also trail-legal just about anywhere across the United States.

Nope, it isn’t targeted at the same guy that rides the dunes in his XP1K every weekend. The Sportsman ACE is aimed intentionally at entry-level riders, youth and smaller or less experienced female riders.

Right off the start, let’s make it clear that if you’re expecting 107 ponies in the ACE you’re gonna be disappointed. That is until you ride it. Polaris engineers have been doing a tremendous job mining horsepower out of the ProStar mills. They’ve developed an all-new ProStar single cylinder engine that churns out 32 horsepower, which the company claims is more powerful than its own 400 HO.

Will we see a 570 dropped into the ACE? We sure hope so. There’s so much potential for this vehicle to expand as it gains acceptance in the market. Even with it’s current engine its a blast to drive and you can bet there are already ACE race divisions being formed.

Again yes, it does have a seat like a RZR (it actually is a RZR seat) so you sit in the ACE and don’t straddle it like an ATV. It also has a steering wheel so you’re actually driving it and not riding it. There’s a 3-point seatbelt and a shifter at your right like your RZR, a ROPS certified roll cage and it also features Polaris On-Demand True AWD/2WD.

The Sportsman ACE uses MacPherson struts up front similar to the 570 Sportsman and dual A-arms out back suspended by steel-body coilover shocks. This set-up delivers 8.2-inches and 9.5-inches of travel respectively.

Ground clearance is actually ten-and-a-quarter inches, which is more than the 50-inch RZR. The ACE rides smoothly, provides adequate power through the trails and didn’t leave our test riders feeling poopy-faced in spite of being spoiled regularly by much higher displacement engines.

The MacPherson strut front end opened up plenty of foot room in the cockpit for a six foot tall driver. Smaller pilots will enjoy the adjustable sliding seat that makes reaching the accelerator easier. You’ll also notice as you slide into your seat that the floorboard is flat so you don’t have to lift your legs in and out of the cab.

Unbuckle the safety net on either side and swing your legs effortlessly into place like you would in a Ranger. We think this has serious appeal to someone that’s finding it increasingly tiresome to throw a leg over a seat, but still hasn’t lost his passion for trail riding.

Polaris claims the Sportsman ACE has received its highest consumer testing response out of any vehicle it’s ever introduced – including the RZR. We hear so many comments about how the industry needs to offer more affordable offroad vehicles and at $7,499 US we think the Sportsman ACE could be another homerun.