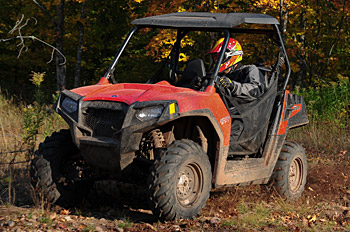 We recently had our first spin on Polaris’ newest addition to the RZR family – the 50-inch wide 2012 Polaris RZR 570.

Our pilots blasted this unit through 85 miles of the fastest and most beautiful trails this Editor has ever ridden around the Lac Labelle, Michigan area and can easily say the RZR 570 is a winner.

Experiencing everything from rocky hill climbs and descents, to thick mud, to pedal-to-the-metal wide-open fire roads – this thing hauls!

Drop your right foot to the floorboard and the electronically controlled fuel delivery to the 567cc single cylinder ProStar mill is immediate as all that power transfers to the ground and flattens you to the back of your seat.

With Polaris’ on-demand true all-wheel drive engaged, the RZR 570’s handling remains exceptional. In two, you can get the back end out and throw some dirt in a controlled power slide as you round out loose corners. With all four corners in action you’d swear you could climb the side of a building.

Steering effort is light and gentle even in the absence of EPS. One test rider noted almost zero arm pump and neither experienced the slightest shoulder ache or back pain the following day.

Traction at all 4 corners grips tightly to the earth. Get mired in chocolate and the 570 gets serious. You can almost feel it getting angry as its determination thrusts driver and passenger quickly to the other side. Heck, you won’t even get your boots muddy.

Still asking, “What if I do get stuck?” Dont sweat it. From behind the seats to the front bumper the RZR 570 is exactly the same as its bigger bore brother and so you can strap on a Polaris 3500 pound winch and be practically unstoppable.

The only questionable area we noted while aboard the 570 was ground clearance. Specs note it at 10-inches with the cockpit empty, but throw 400 combined pounds of human in the seats and it becomes much less.

Ground clearance only really came into play during hill descent however. As the brake is applied and the nose of the 570 dips, clearance is further reduced and the undercarriage will find whatever rock you might be rolling over. Luckily, the RZR 570 comes stock with an extra thick skid plate to protect the under-side from damage.

Realistically, this issue is a small trade off to get everything else this unit has to offer. We think a few additional clicks to the snail cam shocks would raise the unit up more than enough and reduce sag to compensate for both riders in the cockpit minimizing rock hits.

Without hesitation, we think this version of the RZR is going to be one of Polaris’ biggest sellers. At around 10 grand US MSRP, the RZR 570 should be on anyones list in the market for a side-x-side.

You can read more about the 2012 Polaris RZR 570 in the upcoming Best In Class awards issue of Dirt Trax Magazine and we’ll be talking more about this unit on this website in the weeks to follow.

Stay tuned to this website and also visit polarisind.com for more details about this product.