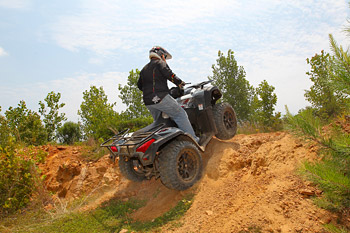 2013 products are being revealed all over the nation and Kymco has one more that deserves a closer look.

For model year 2013 the Kymco MXU 700 fuel injected limited edition sport utility ATV is hitting the ground with a new engine and a fresh look.

Our trip into Charlotte North Carolina to ride the new Kymco quads would drop us out in a field just off the paved road past the motor speedway. With turn two in view we stepped out of the truck to see the latest Kymco MXU utility quad.

The sleek and stylish front end of the machine takes the appearance of a pickup truck. Your eyes will be immediately drawn to the really cool custom wheels wrapped in Kenda rubber. The tires on the MXU stretch out to fill the fenders and seem to have a wide, flat contact patch that deliver superior grip on loose terrain.

After buckling our helmets, we rolled out into the fields to give the MXU a chance to stretch its legs.

Seating is comfortable and transitioning between seated to standing feels natural. The controls located conveniently and the bars seemed to be in a good location, however one thing we noticed was the locking control for the 4WD system requires the rider to remove his hand from the bars to adjust. The logic behind this could be argued that the rider must slow down or even stop before engaging the control, which would help prevent damage to the 4WD system as well.

The shocks on the MXU are simple oil charged preload adjustable with dual rate springs and we think the suspension could use a little more in either travel or shocks or maybe both.

With travel in the range of 6.2-inches out front and 6.8-inches in the rear it wasnt built to launch over huge doubles but handled much of the slower speed terrain riding well.

We understand that the Kymco line is based on the economical more entry-level side and while trying to give the new ATV owner a great price point some things have to be sacrificed, but wed love to see something like the high performance shocks on the UXV retrofitted to the MXU line up or even Fox shox used to add further value to the LE line.

The MXU felt stable while crawling across rough and rocky terrain probably due to the rear sway bar and we felt confident climbing up rutted hills and embankments at lower, more controlled speeds. However when we picked up the speed a bit in the same conditions bump steer was immediately noticeable, which could get a bit hairy for an inexperienced rider.

At the heart of the Kymco MXU 700i LE 4X4 beats a 695cc, single cylinder four-stroke producing a claimed 45 horsepower.

For a 700-class engine we expected a touch more jam out of the gate. In all fairness to the potential of the motor, most importers have to detune initial offerings in order to stay within EPA regulations. We think there has to be more punch in that motor and we hope we’ll find it in later versions.

With the addition of a 700 powerhouse into its lineup, Kymco has become a recognizable player in the American market eagerly nabbing up marketshare by delivering better products each year. The MXU 700 FI LE is another step in the right direction.