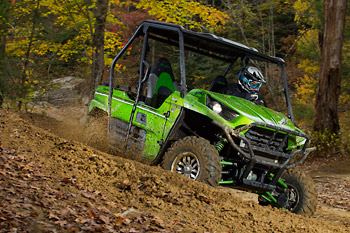 It’s been a big year for side-x-side news. Honda stepped back on the gas with the Pioneer after a fumbled attempt to enter the market with the Big Red, Yamaha replaced the Rhino with a 3-seater Viking and we saw continued momentum from Polaris, Arctic Cat and Can-Am in their respective side-x-side divisions.

Seeing the opportunity for growth in this segment, Kawasaki upped its game with first a new 4-seater Teryx and then in September, Team Green pulled the sheets of its all-new-for-2014 Teryx 800 LE featuring a new mill and a whole bunch of other goodies that prove this company is committed to this segment.

Just recently we were invited to ride the Hatfield McCoy Trail system and get our first impressions of this all-new vehicle.

The improvements to the Teryx for 2014 come in several areas. First, its mill got a big bump in output from 749 to 783 ccs, which equates to an additional 26% more power. Although no horsepower numbers were disclosed, the increase can be felt at each drop of your foot as the 90-degree twin roars to life and exudes its throaty growl.

Careening the switchbacks along Indian Ridge trail, the Teryx’s standard EPS made rounding corners smooth and easy as we climbed higher and higher into the hills limiting negative feedback up through the steering wheel as we powered over jagged rocky ground. Descent was equally inspiring thanks to engine braking and anytime additional braking was needed, the hydraulic discs up front and sealed internal wet brake out back were stop-on-a-dime good.

Thanks to the addition of FOX podium piggyback shocks to suspend the dual A-arm independent suspension at all four corners, tailoring your ride to the terrain and amount of cargo or passenger weight youre carrying is easier than ever.

Throughout the Hatfield McCoy trail system we encountered just about every type of terrain you could expect while riding offroad. After allowing the shocks to warm up a bit over a mile or so on the first morning, we began making slight adjustments to the clickers, first going to full soft and then steadily increasing stiffness across the 24-click range each time we stopped. After about another hour on the trails, ride quality was dialed in just right and rolling over rocky or rutted out terrain was like spreading warm butter over a slice of freshly baked bread.

The 2014 Teryx is built on the same frame as the 4-seater Teryx, which means an increase in wheelbase of 9-inches over the 2013 2-seater version for a total of nearly 86-inches. This additional length significantly improved the Teryx’s bump-bridging ability, which alongside the FOX suspension made tackling big moguls and rollers less noticeable even with the accelerator planted.

That longer wheelbase allowed another ingenious innovation to be added to the Teryx for 2014. Engineers utilized the additional space allotted for the second row seating to add two incredibly deep storage wells complete with sealing lids to provide a total of 48 gallons of water resistant storage space!

These two bins come complete with plugs in the bottom so they’re perfect for packing with ice to store fish on your fishing adventure or even for keeping your drinks cool on a hot summer day. Campers can fill the bins with gear or clothes and ensure theyre kept dry for the next stop. Many of the riders stored additional outerwear in the bins and some even trusted thousands of dollars in camera gear inside their packs to be stored in the bins, which all remained dry and safe throughout rainy, muddy and even snowy conditions.

From the 3-tone, comfortable seats to the pristine Kawasaki green bodywork to the Maxxis Big Horn tires wrapping those sweet looking wheels. Kawasaki has ensured its engineers focused on quality and paid attention to detail during development of the Teryx LE, which truly adds value to its product.

Now if all this still isn’t enough to remove that lemon-sucking sneer from your chops, Kawasaki has sweetened the pot by including an industry-leading 3-year warranty on material costs and labor! So what are you waiting for? Get down to your local Kawasaki dealership and have a look for yourself.