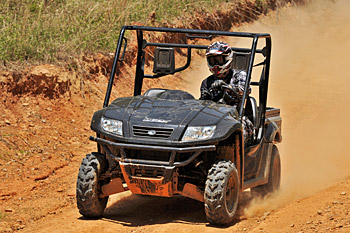 If you caught the episode of Dirt Trax last season featuring Motorhead Mark reviewing Kymco’s UXV side-x-side, then you pretty much understand how our team feels about this side-by-side.

Kymco got its feet wet in the powersports industry by first supplying other manufacturers with parts for their vehicles. As a supplier, Kymco learned a thing or two about quality assurance and its never been more boldly stated than in the introduction of Kymcos 500 fuel-injected UXV.

Yup, that’s right. Kymco’s UXV, previously equipped with a carbureted 498.5cc mill has been upgraded this season with EFI.

We got our turn on the UXV last month, careening through the trails at Carolinas Adventure World, and had an extended opportunity to put it through its paces.

Surprisingly, the results of our testing put it on a pedestal right up there with the Ranger 400. It handles really well and the addition of EFI noticeably improves throttle response. Its equipment list is extensive and its decked out with just about everything you could want in your ride.

Good news for the budget-conscious, too. The UXV will still be available with its original carbureted mill for just shy of a grand less than the fuel-injected version.

The EFI model is still priced less than an equally equipped Ranger 400. For those interested in extra bling, the UXV also comes in a fully jammed SE version and there are plenty of Kolpin accessories available for aftermarket purchase.

Kymco is focused on increasing its dealer network across Canada and the United States. We think dealers lucky enough to take on this brand won’t have much difficulty clearing out inventory, either.

In fact, with Kymco’s aggressive pricing and excellent 1-year warranty, there could soon be lineups forming outside the doors of their dealerships.

Mike Lester
Mike Lester is Staff Photographer and Digital Content Manager for Dirt Trax TV. He is also a Contributing Editor and Guest Correspondent on the show.
Previous article2012 Brute Force 750 4x4i EPS Intro
Next articlePUTTING YOUR ATV TO WORK