FIX IT RIGHT THE FIRST TIME 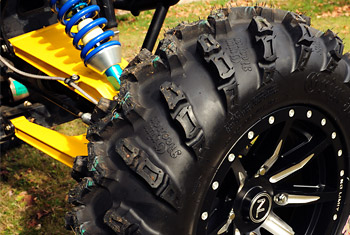 Seems on a regular basis I encounter the same issues with stock axles wearing too fast or even breaking after a lift kit install, but no matter how I explain this to a customer they refuse to take my advice.

I recently had someone bring his Rhino in for a clicking noise coming from the rear end and also from the front.

My assessment was its two-inch lift kit and over-thirteen-inch wide tires on all four corners had been putting excessive strain on the stock axles and differentials and the Rhinos single cylinder engine. Basically it was only a matter of time before disaster struck.

It wasn’t until I suggested high angle axles with larger axle shafts would cure the problem that I figured maybe he didn’t care what I thought.

At his request, I instead ordered two new stock rear axles and one front partial CV rebuild kit. We fixed the machine up and off the owner went to ride on his hunting property that spanned over 1,500 acres.

I received a call on my cell a few weeks later that his Rhino was sitting about a half mile from his barn and the left rear axle had popped out. I rolled out to the scene to find the axle shaft had been rubbing on the inner cup and eventually exploded the boot.

The axle shaft had rubbed so hard on the inner cup that it fused the inner retaining ring into the cup.

Now he’d have to listen, but unfortunately for him this time round it would be almost twice expensive to fix.