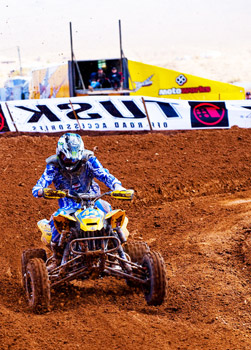 Team Motoworks / Can-Am racer Chad Wienen swept both motos to take the overall win at the opening round of the DWT World MX Racing Championship near Mesquite, AZ.

Wienen quickly worked his way to the front of the field in the first Pro 450 moto for the win, and took the holeshot during the second moto and never looked back aboard his Can-Am DS 450. His teammate, Jeremie Warnia took second overall in the opening round.

“The entire Motoworks team worked hard this weekend and both Chad and Jeremie are going very fast on their DS 450s this season,” says Jimmie O’Dell, Racing Manager for Can-Am ATVs at BRP. “This first race was a great kickoff to the upcoming season and we are looking forward to solid results and championships in 2010 from the Motoworks / Can-Am team.”

The next day, racers took to the track and contested the second round of the series as part of a doubleheader weekend at Mesquite MX Park.

Wienen looked to continue his excellent results from the previous day, but would have to settle for second overall as he went 2-2 for the Pro-class motos. Warnia raced to fourth overall during the second round, going 3-4 in the Pro class.

Dillon Zimmerman had a decent showing in the Pro class with two top-10 finishes on his Motoworks DS 450 for the weekend as well. The next race in the series is January 2 at Glen Helen Raceway near San Bernardino, CA.

“My hat’s off to the Motoworks / Can-Am crew and Ryan Cox, my mechanic. They have all been doing a fantastic job so far and I think we are going to have a great year in 2010.” – Chad Wienen

“My bike was running very well and I had no problems all weekend. I think this is going to be a fun series and I am looking forward to the rest of the rounds.” – Jeremie Warnia