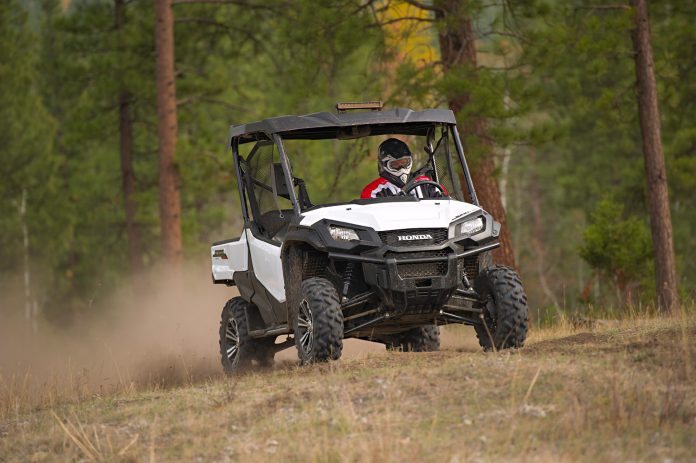 Honda tends to play it conservatively, which is why we were pleasantly surprised by the announcement of a new 999cc parallel twin in an all-new Pioneer chassis. After riding the 3-seater version we walked away with some pretty strong impressions.

First off, this mill is powerful. It snarls out a throaty growl at trail speeds and power delivery to the ground is competitive for this class. Its bottom end torque is very evident enabling it to climb steep grades with ease. Even when fully loaded with three bodies and cargo in the bed, there’s enough power on tap to keep the ride more than spirited.

How does it compare to CVTs found in competitive UTVs? We found the biggest shortcomings of the DCT tend to come when climbing hills or transitioning into and out of corners at speed. In these situations, in automatic mode, it felt as though the DCT was searching for the right gear, upshifting and downshifting until it made up its mind.

Granted, it gets better as the driver gets more used to the tranny but It was annoying at first. The good news: Power levels tended to remain pretty consistent regardless. All this said, these are small problems and the more we drove the Pioneer 1000 the less issue we took with it. Truthfully, red undie-wearing loyals and those inclined toward gear-on-gear transmissions will love this setup and the benefits that come along with eliminating belt wear and belt maintenance.

The coolest feature of DCT is its ability to go to full manual mode via the dashboard mounted toggle switch and utilize the paddle shifters located just behind the steering wheel at the nine and three o’clock positions.

We spent quite a bit of our ride in manual which put us fully in control as we transitioned those same corners and steep inclines, downshifting as we entered the corner, holding the shifts a little longer as power built, then with a quick flick of the finger feeling the acceleration hit as the Pioneer transitions out of the turn. If Honda responds to Yamaha’s YXZ with a pure sport SxS someday, we suspect we’ll find a version of this engine with these same manual paddle shifters.

The Pioneer has an impressive ride and, pretty much like any Honda off-road vehicle we’ve ever tested, the handling is top drawer. Its electrically assisted power steering (EPS) is among the best in the industry providing a near-perfect amount of very linear assist to make navigating tight trials easier and soaking up big hits from trail chatter without bringing negative feedback into the rider’s hands. When steering effort regresses gradually as speeds build, handling remains predictable.

The KYB monotube gas shocks at all four corners provide adequate suspension compliance. We did find the rear shocks to be set too soft in their stock setting and a slight adjustment dramatically improved the Pioneer’s ride. We recommend dealers tune in a slightly stiffer stock setting out of the crate as we doubt the average rider will take the time to make the adjustment themselves. Furthermore, under load or weighted down with cargo, ride quality could suffer.

Our biggest recommendation in the suspension department is for the 3-seater to be placed on par with the 5-seater Deluxe equipped with Sachs Nivomat self-leveling rear shocks. These are awesome shocks and would add a ton of sizzle to this “sportier” Pioneer.

Strange marketing, but Honda released both the 3-seater and 5-seater at the same time and it seems the 5-seater got all the hot accessories. Those Nivomat shocks would give the 3-seater an advantage over the Polaris Ranger and the new Can-Am Defender and would provide unmatched ride quality and infinite adjustability for this utility class.

Though sporty and powerful, the Pioneer 1000’s primary directive is still utility-focused. Its dumping cargo box can hold up to an impressive 1000 pounds and it can tow up to 2000 pounds. Turf mode and full diff-lock are also standard as well as low range so the Pioneer is ready to handle whatever drill you can throw at it.

At the end of the workday though, open up the standard half doors and drop your butt into its durable, comfortable seats and it’s ready to be ridden as gently or as roughly as you can handle.

We expect Honda to continue this hard-hitting approach to its powersports division and as sales of the Pioneer 1000 continue to grow, we think this influx of cash will be reinvested into still more competitive offerings.

As for the Pioneer’s 999cc inline twin, we think it would look great tucked under the seat of a Rincon. Don’t you?