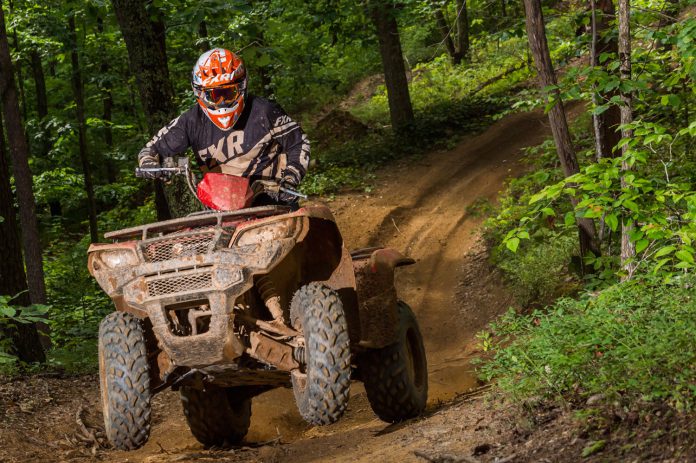 At one time Suzuki seemed unstoppable. The LTR450 was putting a rider on the podium every race and was the focus of every ad campaign.

Then the market collapsed, the LTR450 got the axe and Suzuki more than any other Japanese manufacturers became withdrawn. Ad budgets disappeared, any sign of progression in its offroad division was sidelined and the most anyone heard were rumors of updated stickers. It didn’t look good for Suzuki and like many in the offroad community; we’d begun to lose hope.

Last summer marked the first communication from a Suzuki representative to grace our inboxes since the QuadSport Z400 press event six years ago! We were invited to Georgia for a re-introduction of the KingQuad 500 and 750 and also to get a tour of Suzuki’s Rome, GA assembly and manufacturing facility.

Our opinion of the KingQuad has been something our viewers and readers have been asking us about for years, however without press units available, we’ve been unable to properly evaluate one or compare it to other units on the market.

The KingQuad was always a great ATV and in its hay day stood shoulder to shoulder with any sport utility ATV on the market and it is still relevant today, though we do see some shortcomings.

Where we’ve seen advancements from other manufacturers over the past five years – even the smallest steps year to year over time have left the KingQuad feeling dated. Updates to front end geometry and suspension calibration is needed to put ride and handling at the level of a Grizzly or Sportsman and a bodywork update should definitely be on Suzuki’s shortlist. That said, it is still a well-built and relevant ATV and there’s something there for Suzuki’s marketing team to work with, which will inject some much needed inspiration into its dealer network.

Takahashi Hayasaki was recently appointed President of Suzuki Motor Of America and appears to be driven to put Suzuki ATVs back on the map and re-establishing communication with the offroad media and highlight the KingQuad as the company’s flagship ATV.

Our tour of the Rome, GA manufacturing and assembly facility showed us plenty of hard working Americans diligently assembling the KingQuad from the ground up. The 500 and 750 engines are both assembled in this plant, the bodywork is manufactured in Georgia and the whole ATV is assembled on its state of the art line.

There’s clearly a dedication to the brand and as Suzuki works its way back into the hearts and minds of loyal Suzuki brand junkies we anticipate this newly found enthusiasm will result in new, and groundbreaking technology.

So what’s new from Suzuki’s ATV division? In a word, hope.