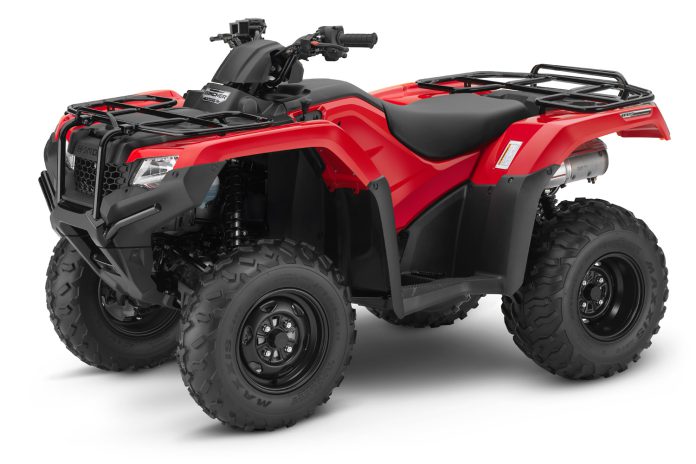 Honda holds an industry dominating reputation for quality and reliability.

If you doubt it, just check the comments on every single social media post made about the companys products. Honda owners wear their red undies proudly and hold onto their ATVs forever because they keep on keepin’ on, ride after ride, after ride.

Honda’s Rancher 420 (called the Rancher TRX 420 in Canada), in its electrically assisted power steering (EPS) equipped version, got a new look in 2015 receiving updated bodywork similar to the Foreman Rubicon. This deluxe version of the Rancher also features independent rear suspension, an updated and easier-to-use reverse lever as well as Honda’s Dual Clutch Transmission, the company’s response to the industry-standard CVT.

As equipped, this EPS Rancher represents a fairly healthy investment of $7,299 (USD) but its 420cc Honda pushrod single is as tough as an anvil and comes with throttle body EFI.

On first observation it kinda made us cringe at the idea of forking over that much coin for a relatively small displacement ATV that doesn’t deliver as much juice as some of its competitors in that price range, particularly the Kodiak 700.

However, although we tend to be blinded by horsepower numbers, we have to keep in mind that, like its namesake, ranchers and farmers put build quality and long life expectancy at the top of their wish lists.

Realistically, in many minds, the daily abuse an ATV will get put through on a farm or ranch over years of use trumps raw horsepower.

We’re not making excuses for Honda here but it isn’t just about the beating your Rancher can take and still purr at the end of the day. Comfort and ride quality are Honda staples with plush suspension, a comfortable seating position afforded by the ample leg and foot room because of its tranverse mounted engine, and incredibly good handling.

These are features Honda has absolutely gotten right and it shows in the dominant sales numbers this vehicle’s name has maintained for more than a decade.

When you stack up overall price against features and benefits, is the Rancher 420 our first choice? Maybe not. However, if you want an ATV that’ll faithfully meet your expectations long after its time, we think Honda’s Rancher 420 can deliver.