HOW ABOUT A GENTLER RAZOR? 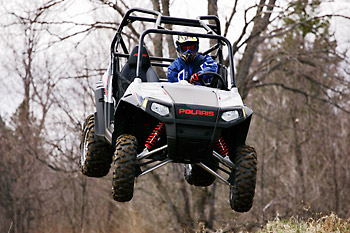 We had mentioned that Polaris has been wise in offering numerous variations on its venerable RZR in order to keep competitors at bay.

Although there are various performance versions and even a couple of different 4-passenger RZRs, basically only two engine configurations are currently available: the 800 parallel OHV twin (in standard and HO versions) and the new SOHC 900 in the RZR XP.

We see this as a good thing because the kind of rider who buys a RZR is looking for better than average power so the wheels can easily break free in dirt and the vehicle can be power-slid intuitively.

With marginal horsepower, especially on a 4-wheel drive vehicle, this often doesn’t happen and the SxS is harder to maneuver in tight terrain or just flat-out, not as much fun to drive.

Here’s the rub: Because of the high performance powerplants Polaris has been using in the RZR, we wonder if there isn’t a huge market for an entry level RZR with 2-wheel drive and a smaller displacement engine – say about 500-550ccs.

The advantage here is it would open the marketplace to a ton of entry-level buyers, presuming of course the price would be considerably lower on a less-featured RZR.

We think there’s a lot of rabid buyers who simply can’t afford to ante up the price for the pricey big-inch models but would readily jump at a bargain-priced performer like this.

Dirt Trax Onlinehttps://www.atvmag.com
Check back frequently for new content and follow us on social media!
Previous articleDOES CAN-AM HAVE SOMETHING IN THE OVEN?
Next articleRZR XP 900 PROTECTION FROM HOLZ RACING