HOW MUCH IS MADE IN AMERICA? 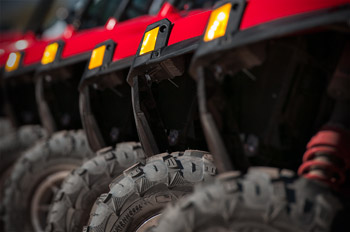 We hear you when you say you’d only buy stuff that’s been made in North America. Not a bad plan at all – but what does it really mean?

In the same breath those stalwart “made in America” voices are praising the Japanese brands and crowing about how good their quality is.

There’s a pretty strong argument for that kind of support for Japanese off-road vehicles, especially considering how many of them are being assembled on North American soil in factories manned by North American workers.

This is all good and it’s an excellent strategy for creating and sustaining NA jobs. We wholeheartedly agree with and support this.

Here’s where it gets murky. There’s a significant trend, not only in the off-road biz but in the North American auto industry, to build parts, components and even whole vehicles off-shore or in Mexico.

Frankly, we can’t think of a single product name, Japanese included, that uses all of its parts sourced from its home country. Whole engines, whole transmissions, instruments and 4-wheel drive packs – even upholstery and body panels – are coming from Taiwan, mainland China, Mexico and Korea – and they’re being used on vehicles we have always held as being “purely American”.

You can argue this is a bad thing and should be curbed, but are you going to pay the extra invoice when those “outside North America” prices are tallied? We’re dead certain the prices wouldn’t be lower and guess what… you ain’t gonna wanna pay more for the cool stuff that’s rolling off the assembly lines – from wherever!

It’s time to open our eyes and our minds to the real meaning of “Made in America”!