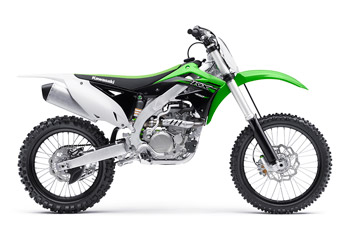 Motocross?! What on earth does motocross have to do with our regular coverage of ATVs and side-x-sides?

Quite a bit actually and their relationship was reinforced last year while attending Kawasaki’s dealer show in San Diego, CA where we saw Kawi’s latest ad campaign featuring a Teryx and a KX450F positioned beside one another in the same full-page advertisement.

Research showed many offroad enthusiasts own more than just one vehicle and their interests spanned over multiple disciplines. Based on this info, rather than marketing the KX450F to only moto junkies, Kawasaki decided to branch its moto message out to its ATV and side-x-side customers as well.

Speaking from personal experience, this writer’s an avid motocross enthusiast and I spend a lot of my spare time at the motocross track with my family.

Whether it’s watching my two girls race or just hanging out and putting laps in for practice; getting out my dirt bike brings me back to my roots and my love for off-road motorsports. In fact, many of the people I know who love ATVs, side-x-sides and even snowmobiles started out riding a mini bike as a kid.

Perched proudly on a display rack in our garage is a 1974 Honda MR 50 Elsinore and right beside it are my kids first bikes. These are the foundation for some great memories, but more importantly have allowed our kids to be actively involved in motorsports from a young age.

So when we got the invite to ride the 2015 KX motocross bikes, I didn’t just pounce, I pushed and shoved everyone else aside and made it clear I was going to this intro.

Kawasaki’s success winning races has been underscored by Ryan Villopotos dominance earning 4 supercross championships in a row. Over the past decade Kawasaki has also won more amateur and 250F championships than any other manufacturer.

For the last 4 years, Kawasaki’s biggest advantage has been its focus on engineering a bike that the rider can customize to better suit his riding style.

The 2015 KX450F has risen to another level with greater rider adjustability and improvements to the motor, chassis, suspension and brakes.

Returning for 2015 is the popular launch control mode, which helps maximize traction in first and second gear when starting on slippery surfaces. Also back by popular demand are the DFI couplers, which easily allow you to tune the power curve by altering the ignition and fuel mapping by simply snapping a different colored closed circuit connector to the ECU module.

The connectors are designated for Standard, Hard or Soft Terrain. The Black connector is used for hard terrain and makes for a smoother power delivery. This is also the best connector for a novice rider to use.

On the opposite end is the white connector designated for soft terrain which generates a more aggressive throttle response and what a pro-level rider would opt for.

The Green connector is what Kawasaki considers the balanced connector and what is best used for a general setup.

Optional KRS software offers more adjustability as you can customize your own preferences for what amounts to an infinite range of settings.

We’d love to see these two features on an ATV or side-x-side. Provided EPA regulations can be met, how awesome would it be to easily change the power delivery based on the terrain you’re riding?

This technology has given Kawasaki a competitive advantage on the track and sets them further apart from the competition in the offroad market.

The biggest news for 2015 is the new Showa SFF-Air TAC (Triple Air Chamber) fork where the right fork acts as your spring and the left fork does the damping.

The three chambers work in harmony to maximize small and large bump absorption and increase the level of adjustability and durability.

You can easily alter spring pressure without having pull the fork leg apart and every KX 450F includes a digital air pump, which is ideal for checking and adjusting the air forks with precision.

Out back, the Uni-Trak suspension with Showa Shock gets a revised valve code for improved high-speed handling and stability.

We’re impressed with the track performance of the 2015 KX450F and also with Kawasaki’s leading edge technology and if we have the opportunity to attend another 2-wheeled event, you can bet we’ll be elbowing our way to the front of the queue.

Vern Putzer
Vern Putzer is the Producer of Dirt Trax TV and is also a Contributing Editor and Guest Correspondent on the show.
Previous article2015 RZR XP 1000: BUYING HORSEPOWER INSURANCE!
Next articleHOW MUCH IS MADE IN AMERICA?