HOW MUCH SHOULD YOU SPEND TO FIX YOUR ATV? 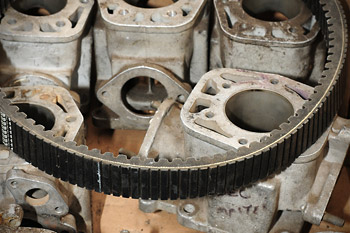 I recently had a young man bring his ATV over to see if it was worth fixing. His 1992 Polaris 250 Trail Blazer belonged to his grandfather, but he didn’t think it was worth putting the money into it to get it going again.

Of course I love to repair old rides – especially ones that have some sentimental value. If the repairs end up being a bunch of small things though it could drain the cash reserves really quick.

As I began adding up all the little repairs it became evident that the machine needed more repairs than its resale value was worth.

Its CVT belt cover was cracked open and the belt had also suffered at the hands of the weather and trail debris, which would add costs to the repair list. Then after inspecting the air cleaner, I discovered the box it was housed in had cracked all the way around totally separating from the carb and leaving the throat of the machine open for anything it could suck down. Then as I squeezed the front brake lever the tension quickly gave way and it seemed there were no brakes at all.

Costs were adding up, but there was no payment tied to the machine and it was a young man’s grandfather’s hunting ATV. So I needed to check to see if he wanted me to move ahead.

When do you fix an ATV and when do you dig a hole in the yard and bury it? It’s a tough decision and one you have to eventually make. If it had been my decision I would have fixed this particular ATV, but young owner decided it was time to take his ATV to the dump.