IN THE PRESENCE OF CHAMPIONS 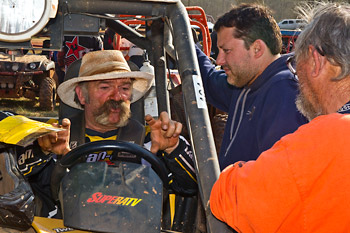 This is a true story:

It was a brilliant and warm sunny day in southeast Georgia and with a slight northeast wind the dust from a heavily covered MX track masked the my truck hood.

I stood silently listening to the sounds of race machines ripping down to the starting lanes for qualifying at Durhamtown Plantation.

The GP style race qualifying was to start at 10:00 AM but there was another moment in time beginning to unfold. As I walked down to the starting line a familiar face strolled up to say hello.

Mike Penland brought his A-game to the track for a chance to put his new 2013 Can-Am Maverick in the mix for a win. Penland has had over 150 race wins 11 national championships and many other titles and today it was he and his machine against the competition once again.

Mike is normally found on a Utility ATV and is also best known for that but today it was the side by side that brought him. Most have no idea the race knowledge that is stored in this man’s head and it isn’t until you get to know Mike that you can really appreciate it.

As I combed the crowds looking for a cool photograph I noticed someone that may have been a bit outside of the normal SXS racing crowd. His face told a story of an eager racer who was watching and hoping no one would beat his lap times.

His machine of choice was an Arctic Cat Wildcat. This well known champion was none other than Tony Stewart and the number 14 emblazoned the shoulders of his side-x-side.

It was a short, but particularly special moment for both racers to talk about the love for going fast.

I was really glad to catch this moment and also to know that now as long as I have wanted to be a NASCAR racer, the big NASCAR racers want to be just like us!

Rick Sosebee
Previous articleMATTRACKS MT PLUS
Next articleBLACKLISTED FOR LIFE