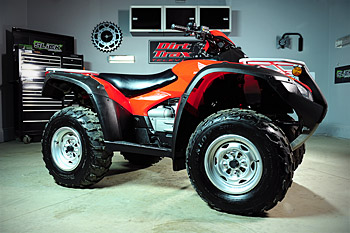 For decades, Honda has been the market share leader in the ATV business.

Over the last decade, strong challenges have come from Yamaha and Polaris, but until recently, Honda has edged those two titans for actual retail ATV sales by a nose.

Since 2009, however, Polaris has been the dominant force in the industry and, particularly, when you combine its ATV, UTV and RZR sales, it continues to advance beyond Honda in sales of 4-wheeled off-road vehicles.

The Honda nameplate remains the status quo for prestige and reputation but the steady ebbing of its market share has placed a spotlight on some of its key products.

Honda’s failure to develop a CVT transmission for its ATVs has meant it has challenges competing on a parallel price level with every other manufacturer when it uses costly-to-manufacture hydrostatic and torque converter automatics.

Although Honda’s transmission tech has proven to be bulletproof, CVT drive trains are just flat-out less expensive to produce and get the job done with incredible efficiency.

The competition continues to use fully independent suspension systems, EPS and EFI on more and more models – even reaching down into the middle of the marketplace (500ccs and lower).

The fact is, Honda has some very well equipped, recently updated models offered on the Rancher platform and these are light, strong performers with extremely good handling and have built-in features like electronic fuel injection and independent suspension.

On the other hand, some of the Honda line-up needs to be freshened. Both the flagship Rincon and the 250 Recon are being overshadowed by competitors offering newly updated (some built completely off-shore) models with flat-out better equipment lists at lower prices.

An expansion of its side-by-side, the Big Red, into more models targeted at enthusiasts would be a successful venture, too.

ATV buyers tend to gravitate to the latest shiny new thing and some of Honda’s models have remained fundamentally unchanged for a long time.

The good news is the company’s ATVs are still impeccably produced and deliver the same long life and solid resale value at trade-in.

There are hundreds of thousands of Honda owners waiting for the “next big thing” and with the kind of reputation and customer satisfaction Honda has delivered over the last three decades, it’s a cinch those owners would buy one again.

Dirt Trax Onlinehttps://www.atvmag.com
Check back frequently for new content and follow us on social media!
Previous articleRIDING 2-UP ON AN ATV IS DUMB
Next articleWHAT’S THE SCOOP WITH ELECTRIC SIDE-X-SIDES?