IS THE WILDCAT BETTER THAN THE RZR XP? 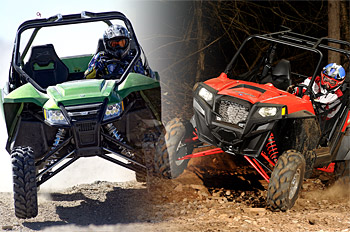 Talk about a one-two punch to the jaw! Eighteen months ago, Polaris rocked our world when it upgraded the RZR line-up to the new XP 900 chassis.

It took us off guard and surprised us because up until that time we honestly thought the RZR 800 S was pretty much the epitome of what a high performance SxS could be.

When we drove the new 900 we were completely blown away by how much better in stock form it handled, rode the gnarliest bumps and delivered jaw-dropping power from its repositioned, high output EFI powerplant.

Our opinion then: This is one super-serious piece of off-road equipment and it won’t be matched anytime soon.

Out of the blue, last summer, Arctic Cat dropped the new Wildcat into the marketplace. We didn’t get to ride it the first time we saw it, but a month or so later we did.

That experience was extremely revealing! The handling was spot-on, the suspension was incredible, maybe even a bit deeper and plusher than the RZR.

We rode the Wildcat through ginormous bumps and couldn’t bottom it, couldn’t get it to hunt off its line – the thing behaved incredibly straight and true through some of the worst off-road junk we could find to ride it over.

Its EFI V-twin was and is a formidable engine lacking nothing in power and torque. We were super-impressed; still are.

One thing we really like and respect about the Wildcat is Arctic Cat didn’t pattern it after the XP900.

Remember, based on the Wildcat’s introduction, the Cat engineers had already been working on this off-roader for about two years before the 900 was available.

This means the tekkies had seen the success of the original RZR platform and from the outset had decided to take things up a notch further.

We think it’s pretty amazing both companies had decided this category needed a vehicle with incredibly long travel suspension and nimble, improved handling along the lines of an off-road racer.

Frankly, it’s almost impossible to diss either one.

Dirt Trax Onlinehttps://www.atvmag.com
Check back frequently for new content and follow us on social media!
Previous articleBEST IN CLASS: BEST PURE SPORT ATV
Next articleLOCK UP YOUR TOYS!