LOCK UP YOUR TOYS! 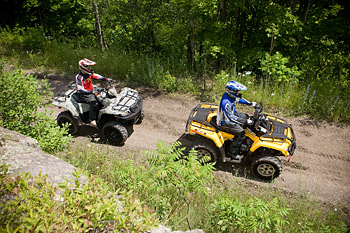 There’s a lot of pride taken in owning your own ATV or side-x-side.

The look of it in the garage, the sound of its throaty exhaust, the way the hairs on your neck stand up as you imagine opening up the throttle at your favorite riding spot.

As owners and riders, one thing we need to keep in mind is that there are people in this world who are just waiting for you to let your guard down so they can take your ride and make it their own.

I recently overheard a conversation about a young man’s side-x-side that had been stolen while camping at a popular off-road event.

Unfortunately his brand new Yamaha Rhino had attracted the attention of a thief and shortly after nightfall, his ride was hitting the trails without him.

When asked by the police officer where he’d parked, the young man replied, “Well in front of my camper of course because that’s where I always park it here and nobody ever messes with our camp.”

With a curious look on his face, the officer asked where he’d left the keys for the Rhino and the young man replied, “Well, in it of course! I’ve been coming here for years and no one has ever stolen anything from our camp.” Wow, amazing right?!

This young guy was very fortunate that weekend and actually recovered his Rhino only a few hours after it was reported stolen. Apparently a couple young kids were caught driving it around not far off from the owner’s campsite. Again, this guy got lucky.

Here’s the deal folks: Just because you think it couldn’t happen to you doesn’t mean it won’t. If you want to keep your off-road rig safe, make it difficult for thieves to steal it. In most cases, if its to tough to take, they’ll move on without it.

Rick Sosebee
Previous articlePHONES, FAMILY AND FINDING A BALANCE
Next articleWHO IS NEXT IN THE PERFORMANCE SxS BIZ?