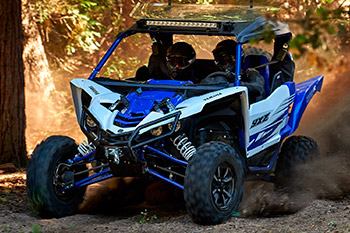 Luke: I found that confusing at first, too. If the YXZ is the first pure sport, what is an RZR or Maverick or Wildcat? I think what Yamaha means is this is the first vehicle to be 100-percent focused on only the Sport-Performance segment.

Where the others advertise and build features into their Sport SxS line-ups to make them useable by a wider range of people, Yamaha built the YXZ to perform at its best only in high speed situations.

It is not a mud-runner, it’s not a rock-climber, it’s not really a trail vehicle – because it’s not supposed to be. The confusion I think comes from the word “Pure”. Yamaha is saying they are the first Pure Sport SxS… yet we, and others have been calling RZRs and Wildcats “Pure Sports” for a long time.

DTX: In your opinion is the YXZ a credible entry into the Pure Sport SxS market?

Luke: The YXZ1000R is absolutely a credible entry into the Pure Sport market. It is every bit as pure sport as anything else out there. It has no excuses to make. But it does have to come with a disclaimer. Is it credible? Yes. Is it versatile? Not as much as the others.

So, when you’re talking about the YXZ you have to talk about it in its element… where it was designed to be run, where Yamaha advertises and promotes it to be run.

DTX: What feature is most outstanding among its unique engine configuration, driveline and tranny differences?

Luke: Theres no question the most outstanding feature of the YXZ1000R is its transmission. It’s almost sad because the rest of the vehicle is equally as awesome. However, the transmission is so unique it overshadows all other aspects of the vehicle. The fun and excitement of pounding shifts off the 10,500-rpm redline isnt something you can easily describe.

You have to do it to know why it’s so amazing. The rest of the vehicle is pretty impressive, too. Without that high revving 3-cylinder engine, the transmission wouldnt be as fun to use. Without the expertly designed and tuned front and rear suspensions none of it would matter because you couldnt drive it as fast as you wanted to.

DTX: The YXZ1000R, by Yamahas own admission, appears to be down on power when compared to two of its three main competitors. Your thoughts?

Luke: This is an interesting one. I strongly feel this vehicle should be compared to its non-turbo competition. Up against a Maverick XRS 1000, RZR XP1000 or a Wildcat X, the YXZ is more than competitive. In fact, it’s downright impressive. But add in that extra 30 to 40-hp midrange boost you get when you add a turbo and the YXZ can’t compete on engine power alone. This is not to say it can’t keep up.

With the engine being mechanically linked to the rear wheels, it results in a higher percentage of the engine’s horsepower getting to the ground. That’s something you can absolutely feel in the seat of your pants with the YXZ1000R. Even the turbocharged competition loses some of its super-impressive engine power to inefficiencies in the transmission.

DTX: It sounds like you really approve of the manual shift gear-on-gear YXZ tranny. Is it for everyone, everywhere?

Luke: Definitely not. In fact, it’s only “for” the right person in the right environment. After trail riding it, I can say for certain that, while it can be done, I wouldnt want to do it all day. At least not when there are CVT equipped SxSs available.

Likewise, crawling over rocks or churning through the mud is not where the YXZ shines. It doesnt do well in these areas because it isn’t meant to; so dont expect it to. If you run out in the open, like on fast open trails, fire roads, dunes… anywhere you can really maintain speed and if you want a more involved and challenging driving experience, if you want to shift gears, the YXZ1000R has no equal.

DTX: Youve ripped, shredded and jumped the YXZ more than anyone we know. Whats it compare like to the RZR, Maverick and Wildcat on an MX Track?

Luke: On a track the YXZ really takes a lot of focus to drive. You have to retrain yourself to remember to shift. You have to be really good at power-shifting without missing gears. Missing a gear at the last second leading up to a 70-foot double will not end well. It’s also interesting to think about cornering on a track with a manual shift vehicle. Cornering hard requires two hands on the wheel, but if you need to shift mid-corner you have to remove one hand.

It’s just so different and requires so much more focus. I was actually tired after an afternoon on our test track. With all that said, the suspension is incredible and can handle anything, absolutely anything you can throw at it: Track, trail, dunes…whatever.

DTX: Should Polaris, Can-Am and Arctic Cat be worried about the YXZ1000R and its paradigm shifting gear-on-gear tranny? Should they respond?

Luke: It was a few years ago we first made the suggestion to Polaris they should put a manual transmission in an RZR. The YXZ proves everything we assumed about the idea. It changes the riding experience so drastically you almost feel like you’re not driving the same class of vehicle. Should the others do it? They should wait to see how the public reacts and accepts the YXZ before making any big moves.

However, I think it’s something they need to seriously consider. Its fun and its exciting and it makes you want to keep riding. Thats a good combo.

Dirt Trax Onlinehttps://www.atvmag.com
Check back frequently for new content and follow us on social media!
Previous articleTurbo RZR XP vs RZR 1000 S In The Dunes
Next article2016 KAWASAKI TERYX AT HATFIELD MCCOY